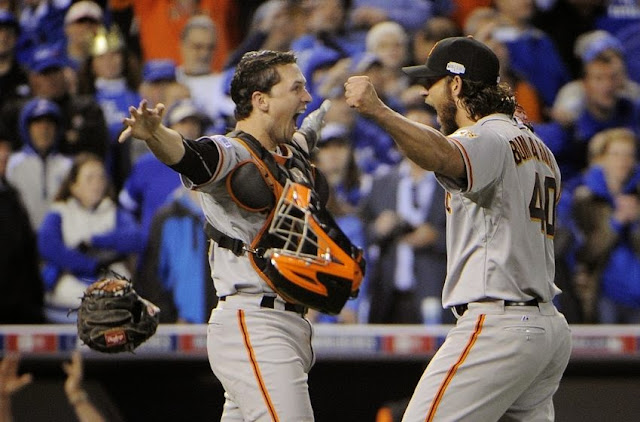 WORLD SERIES- Those of us who wanted a Game 7 in the 2014 World Series weren't disappointed.

Game 7 was made possible by the Royals lighting up Giants starter Jake Peavy early in Game Six on Wednesday, cruising to an easy 10-0 win and tying up the series at 3 games apiece.

For Game 7, the Giants got out to an early 2-0 lead off of Kansas City starter Jeremy Guthrie thanks to a pair of RBI sac flies- one off the bat of Michael Morse and Brandon Crawford. However, the Royals got those two runs back in the bottom of the second and managed to chase San Francisco starter Tim Hudson after 1⅔ innings when Alex Gordon hit an RBI double and then advanced to third before coming home on an Omar Enfante sac-fly.

In the top of the 4th, Giants 3B Pablo Sandoval led off with an infield single, followed by a Hunter Pence single and a Brandon Belt fly ball to left field that advanced Sandoval to third. By this point, Royals manager Ned Yost pulled Guthrie and brought Kelvin Herrera in from the bullpen. Morse singled, which brought Sandoval in from 3rd before Herrera struck out Brandon Crawford and got Juan Perez to ground out and end the inning.

Nursing a 1-run lead, Giants manager Bruce Bochy brought in starter Madison Bumgarner from out of the bullpen. Although dominant against the Royals earlier in the series, Bumgarner immediately gave up a single to Omar Enfante followed by an Alcides Escobar sac bunt to move Enfante into scoring position, but that was followed by fly ball off the bat of Nori Aoki to left that LF Juan Perez managed to run down for the second out. Bumgarner then managed to get Lorenzo Cain to strike out and end the bottom of the 5th.

Instead of going to the bullpen, Bochy went with Bumgarner into the 9th inning, with the Giants starter getting better as the innings progressed. In the bottom of the 9th, he got Eric Hosmer and Billy Butler to go down quietly for the first two outs. Alex Gordon stepped into the batter's box and hit a line drive into left center that was misplayed by Gregor Blanco which rolled all the way to the wall. Gordon beat the throw to third and brought the increasingly demoralized crowd at Kauffman Stadium back to life with the tying run 90 feet away. However, Bumgarner got Salavor Perez to pop up to 3rd to clinch San Fransico's third World Series title since 2010.

For his two commanding starts and the Game 7 relief appearance, Madison Bumgarner was named the MVP of the 2014 World Series. On Friday, the City of San Francisco held their third World Series parade in less than five years. 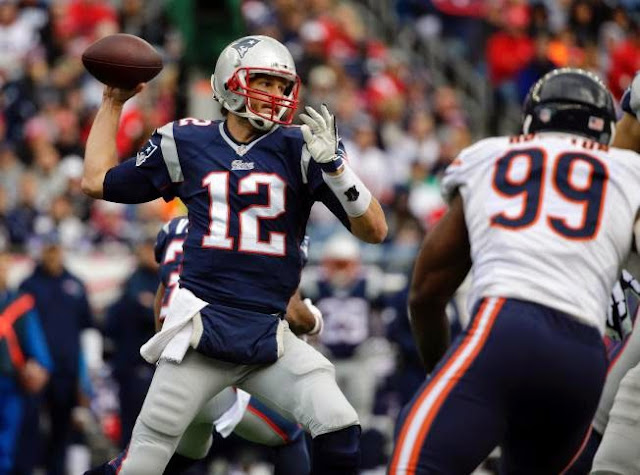 NFL- After struggling just to outlast the Jets on Thursday night last week, the Patriots made it look easy against the Chicago Bears last Sunday when Tom Brady threw for 5 TD passes at Gillette Stadium.

New England had a 31-7 lead in the final minute of the first half when Bears QB Jay Cutler fumbled deep in Bears territory and Rod Ninkovitch recovered and ran it back for a TD with 55 seconds left in the half.

Brady would then connect with Gronkowski for a 46 yard TD reception to make it 45-7 on the Patriot's opening possession of the second half. The Patriots would cruise to an easy 51-23 win over Chicago thanks to 3 TD passes from Brady to Gronk, along with TD passes to Tim Wright and Brandon LaFell. Brady went 30-35 with 354 yards on the day to go with the 5 TDs on the day. Gronk caught 9 passes for 149 yards and the 3 TDs while Gostkowski made all three of his FG attempts.

This Sunday's game is a marquee matchup between two first-ballot Hall of Fame QBs when the Patriots will host the Denver Broncos and QB Peyton Manning at Gillette this weekend. Kickoff is scheduled for 4:25 ET and the game will be televised on ESPN.

ELSEWHERE IN THE NFL- As good a day as Brady had last week, Steelers QB Ben Roethlisberger had an even better one, with 6 TDs and 522 yards, going 40-49 in the Steeler's 51-34 win over the Indianapolis Colts. The performance set a Steelers franchise record and was an exclamation point on Big Ben's 100th career win. 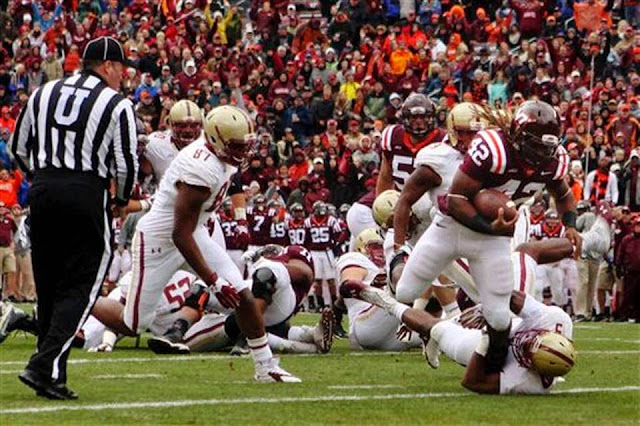 NCAA FOOTBALL- The Boston College Eagles are now bowl-eligible after a road win in Blacksburg, VA against Virginia Tech. Although the Hokies got out to an early lead in the first, the Eagles took a 14-10 lead into halftime.

After the half, the Eagles extended their lead to 23-10, but Virginia Tech made it a 23-17 game early in the 4th quarter and took a one point lead on a pass from QB Michael Brewer to TE Bucky Hodges to give the Hokies a 24-23 lead.

With just over five minutes to go in regulation, Alex Howell gave Boston College the lead once again thanks to a 44 yard FG attempt. After the Eagles defense held the Hokies to a 3 and out on the following possession, the Eagles started to pull away thanks to a 57 yard TD run from QB Tyler Murphy to make it 33-24 Boston College. The Hokies would close the gap to 31-33 thanks to another driver from Brewer that was capped with a 5 yard TD pass with 1:09 to go, but the following onsides kick was recovered by the Eagles, which allowed them to simply take a knee and run out the clock.

Murphy went 8 for 15 with 110 yards and two TDs passing and 122 yards rushing with another TD. Charlie Callinan and Marcus Outlow each had TD receptions on Saturday as well.

This would be Boston College's second win in a row after beating Wake Forest on the road last Saturday by a 23-17 final. Next Saturday, Boston College will host the Louisville Cardinals at Chestnut Hill. Kickoff is scheduled for 7:25 PM ET and the game will be televised on ESPN 2. 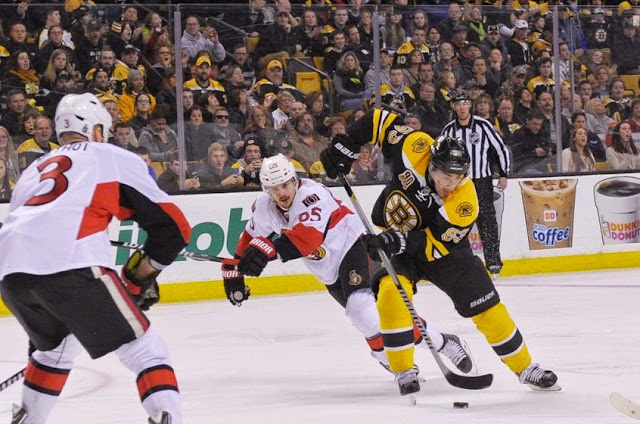 NHL- After blowing a 3rd period lead to the Minnesota Wild at home, the Boston Bruins hit the road for a quick trip against the Buffalo Sabres on Thursday night, getting past Buffalo 3-2 in OT thanks to a Brad Marchand tally just 1:20 into OT.

On Saturday night, the B's returned home to host the Ottawa Senators for the first time this season. Marchand would open up the scoring on Saturday night, giving Boston a 1-0 lead a little over a minute into the contest. Mark Stone got the equalizer for Ottawa with about 30 seconds to go in the first period, giving the Bruins a 3-1 lead.

The second period was all about Matt Fraser as he had two tallies less than 90 seconds apart to give Boston a 3-1 lead. Heading into the 3rd, the Bruins would add tack on some more insurance when Seidenberg got an unassisted goal just over two minutes into the period. Ottawa would get on the board once again with a Mika Zibanejad goal with about five minutes left to go, but that would be it for the Sens.

Tukks Rask turned aside 27 of 29 shots faced on Saturday as the Bruins went on to win by a 4-2 final in their first meeting with Ottawa.

The Bruins homestand continues on Tuesday when the B's will host the 4-2-3 Florida Panthers at the Garden. Puck is scheduled to drop at 7:00 ET and the game will be televised on NESN
Posted by Fenway_Nation at 1:00 PM