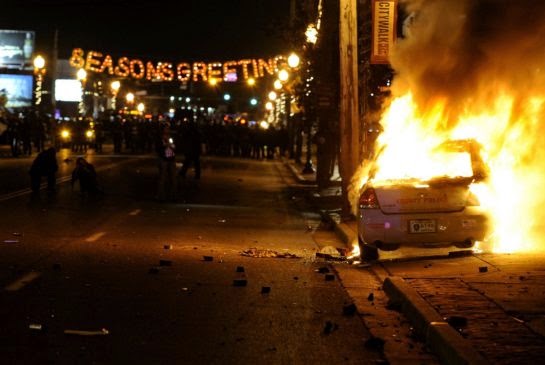 For the third straight night, authorities in the St Louis area struggled to contain arson and looting after a St Louis County Grand Jury decided there wasn't enough evidence to indict police officer Darren Wilson in the August 9th shooting death of 18 year old Michael Brown. Brown was black while officer Wilson is white, and the shooting underscored racial tensions throughout the region.

Brown and a friend were videotaped stealing cigars and threatening the clerk of a convenience store in Ferguson, MO. Minutes later, officer Darren Wilson spotted the two walking down the middle of a nearby street, apparently unaware of the strong-arm robbery that took place. After exchanging words, Brown reportedly reached into Wilson's cruiser, punching the officer and attempting to take his sidearm. Two shots were fired, one of them grazing Brown before he fled a short distance. According to Darren Wilson, Brown was about 40 feet away when he turned around, reached into his waistband and charged at him. Wilson emptied the remaining magazine of his department issue SIG-Sauer P229 .40S&W, striking Brown four more times. Witnesses, including Brown's accomplice in the convenience store robbery, claimed that Wilson had shot Brown in the back as he was fleeing or when his hands were raised when he was trying to surrender- although this testimony was contrary to both forensic evidence and other eyewitness accounts.

Despite pleas from officials and Brown's family, shortly after St Louis County DA Robert McCoullough announced that no criminal charges would be filed against Wilson on Monday night, shops along Ferguson's main thoroughfare had their windows broken by looters as they swarmed in and picked shelves clean. As many as 25 buildings were burned since Monday night, including a number of locally owned and operated shops, stores and restaurants. At least 100 arrests were made after shots were fired and some St Louis county police cruisers were also torched, but not before having weapons stolen from them- including at least one AR-15 rifle. A body was found in a burned-out car in Ferguson on Tuesday morning, a death that police are ruling 'suspicious'.

One of the businesses damaged in the rioting was Natalie's Cakes and More, owned by Natalie DuBose who had been in business for just over a year. Prior to that she had been selling cupcakes at flea markets and the single mother said that the store was her only source of income. After an online appeal, DuBose reportedly received more than $110,000 through online fundraiser site GoFundMe to help rebuild her business and she said she plans to stay in Ferguson.

UPDATED: View a map of businesses that were set fire last night after the #FergusonDecision: http://t.co/dpTTAwCWZN http://t.co/z79ld5v1n0

Other store owners were more proactive in protecting their businesses, arming themselves and guarding each others' businesses in shifts as the rioting and looting spread while the police or National Guard were nowhere to be seen. One white-run business in Ferguson was protected by armed black volunteers from the neighborhood who were regular customers.
Posted by Fenway_Nation at 10:04 PM