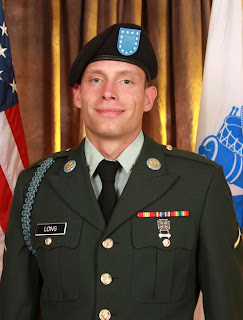 Today marks what would've been the 25th Birthday of US Army Pvt. William 'Andy' Long of Conway, AR.

On June 1st, 2009, Long and Pvt. Quinton Ezeagwula were both shot outside a Little Rock, AR US Army recruiting center in broad daylight. Long was killed while Ezegwula was hospitalized and survived. American Muslim convert Abdulhakim Mujahid Muhammad- nee Carlos Bledsoe- was arrested the same day and confessed to the shooting.

The shooting took place one day after abortion provider Dr. George Tiller was gunned down in his Wichita, KS church, vindicating an earlier Homeland Security report naming gun owners, military veterans, the tea party and pro-life groups among others as potential domestic terrorists in the eyes of the Obama Administration and their unquestioning supporters on the left and in the mainstream media.

Almost immediately in the wake of Tiller's murder, Attorney General Eric Holder sent US Marshals to protect an unspecified number of abortion clinics. However, it took more than 4 days for Holder or the Justice Department to publicly comment on the shooting of Pvt. Long. The White House did issue a brief statement approximately 48 hours after the Little Rock murder took place, but if the media wasn't busy attempting to portray every last granny as a potential domestic terrorist, they were waiting in breathless anticipation for the President's June 4, 2009 speech to the Islamic world from Cairo's Al-Azhar University.

Long's death was considered to be the first time since the Septeber 11 2001 attack on the Pentagon that terrorists killed an active-duty member of the military on American soil.

The family, understandably distrustful of the media, has been mostly reluctant to talk to the press- although the William's father did do an interview with Little Rock's KATV and William's uncle penned an op-ed for the Racine, WI Journal -Times earlier this month.
Posted by Fenway_Nation at 1:23 AM