EMD: Perhaps the biggest news of the month (if not the whole year) is the acquisition of locomotive manufacturer Electro-Motive Diesel by Caterpillar's Progress Rail Services from private equity firms Berkshire Partners and Greenbriar Equity LLC in a deal believed to be worth 820 million. Started in the 1930s as the Electro Motive Company and acquired by General Motors by the end of the decade, EMC started out making small, low horsepower switchers before graduating to the FT series. The introduction of the distinctive FT series in 1939 was seen as start of the demise of the steam locomotive while ushering in the streamliner-era.

Immediately after WWII, EMD's locomotive manufacturing faced competition from steam locomotive manufacturers ALCo, Baldwin and Lima-Hamilton and their early entries into the diesel locomotive market- the most resilient of which (ALCo) lasted until 1969. By that time, the EMD brand was introducing successful locomotives along the lines of the SD40 but was also facing competition from GE's burgeoning diesel manufacturing. Even with orders for the popular SD70MAC and SD70ACE from Class I haulers CSX, BNSF and Canadian National coming in, General Motors sold off their EMD subsidiary to Berkshire and Greenbriar in 2005.

Several overseas companies manufacture EMDs locally as well. India's Diesel Locomotive Works manufactures EMD engines and parts under licence, with EMD having a 50 year presence in India. Sweden would produce locomotives with EMD components up until the 1970s through Nydquist & Holm while Australia's Clyde would manufacture EMD products for the state-run railways throughout Australia as well as the privately-run ore-haulers in Western Australia.

As a side-note, a half-dozen Clyde Built SD50S that had worked for Western Australia ore-hauler Hammersley Iron were exported to the USA when they were replaced by American-made C44-9Ws a decade ago. The Clyde-built locos [which after nearly 2 decades of hauling ore in the Australian outback could hardly be described as 'gently used'- NANESB!] roamed the country briefly as loaners before being purchased by the Utah Railroad. Here, Aussie import Clyde #6064 is seen in it's distinctive Genesee & Wyoming orange paint while between assignments at Utah Rail's Midvale, UT yard in April 2009. 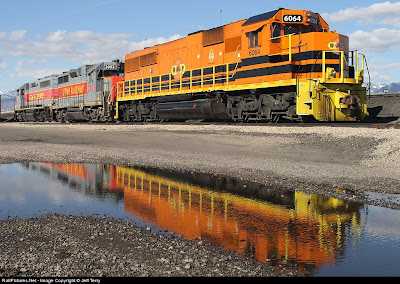 NORFOLK SOUTHERN: Before purchasing EMD outright, Caterpillar subsidiary Progress Rail Services was busy re-engineing and refurbishing EMD locomotives approaching the end of their service life. In addition to the Progress Rail PR30Cs being tested extensively by Florida East Coast for much of the last year, Norfolk Southern was testing a pair of higher-horsepower Progress Rail rebuilds on their Illinois lines. The units were rebuilt from SD60s Norfolk Southern was withdraing from service, designated PR43Cs (PR for Progress Rail, 43 for 4300 HP and C for 6 axles) and worked mainly around the Peoria, IL area- headquarters of Progress Rail's parent company Caterpillar in case any servicing was required. 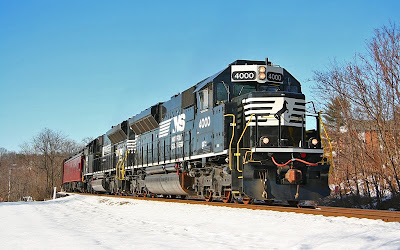 One can only learn so much about a locomotive's performance on the flat-as-a-tabletop terrain of Illinois, so in February, the Norfolk Southern decided to bring them to Virginia to test their capabilities in hillier terrain. Secondhand reports indicate that both PR43Cs handled the 1.58% Starkey Grade on the line out of Roanoke, VA with about 50 loaded hopper cars and the test car quite well. Norfolk Southern would also bring in Kansas City Southern's EMD GP22ECO mother/slug set and Brookville Equipment Corporation's 'co-generation' hybrid locomotive for road testing and evaluation in the Roanoke area over the spring.

ARIZONA: Passenger service returned to the restored 1916 depot in the Arizona mining town of Globe for the first time in 77 years with the Copper Spike excursion. The excursions have been operating since late 2008 and the newest addition is Arizona Eastern E8A painted in a scheme reminiscent of Southern Pacific's 'Black Widow' livery. The Copper Spike's consist also includes a dome car and a rebuilt Illinois Central coach that's now a club car. The Arizona Eastern normally hauls freight between Miami, AZ to the Union Pacific interchange at Bowie, AZ- a distance of 130 miles. In 2008, AZER also gained trackage rights over UP's former Southern Pacific Sunset Route between Bowie, AZ to Lordsburg, NM and acquired the former Espee branch between Lordsburg and Clifton, AZ. The Arizona Eastern is a wholly owned subsidiary of Iowa Pacific Holdings, LLC. 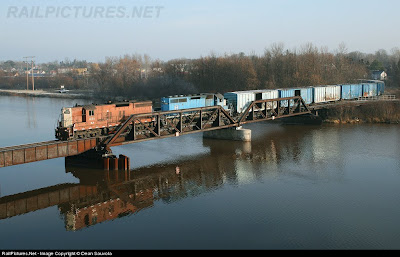 MICHIGAN: The Escanaba & Lake Superior filed a request with the Surface Transportaton Board to abandon 43 miles of trackage between Ontonagon and Frost in Michigan's upper peninsula. Smurfit-Stone Container, the largest shipper on that line, and the Ontonagon Economic Partnership have agreed to draft a joint letter to the STB requesting a stay. Both the board and Smurfit-Stone are in talks with outside parties to sell the currently idle paper plant. In anticipation of the pending abandonment request, the E&LS began moving equipment off the line and elsewhere as early as November 2009- when railpictures.net contributor Dean Sauvola caught E&LS SD9 #1224 and SD40-2 #501 hauling a string of empty boxcars stored at the mill across the Ontonagon River. Hit particularly hard by the recession, Ontanogon County MI has one of the highest unemployment rates in the nation.

INDIA: At least 145 people were killed and another 250 injured when suspected Maoist terrorists in West Bengal sabotaged a stretch of track that the the Gyaneshwari Express was travelling on, derailing the train and knocking some of the passenger cars into the path of an oncoming freight train. Indian Railways minister Mamatma Banerjee said that rebels removed a 50cm section of rail and timed it so that the Gyanshwari Express would collide with another train. Local investigators found Naxalite literature at the scene, although they wouldn't identify which specific group. According to the Ministy or Railways, the engineer had just left the station in the Paschim Medinipur district when the train hit the sabotaged portion of track, derailing 13 cars from the Gyanshwari Express.

Posted by Fenway_Nation at 9:42 PM