Sports Chowdah Update- USA Advances At the Last Minute; Sox Road Trip off to Rocky Start; Anybody Else Feeling a Draft? 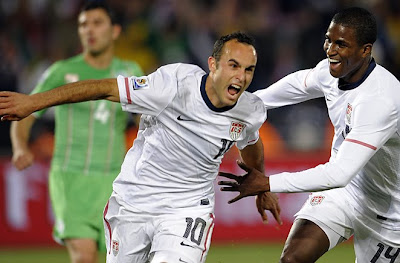 Well- that was a close one. I actually caught my first televised 2010 World Cup game on Tuesday; Mexico versus Uruguay. Tuned in just in time to see Uruguay's Luis Suarez score the only goal of the match right before halftime before getting distracted and losing interest. I was quite disappointed to learn Tommy Smythe wasn't calling the game for ESPN- as it turned out the diminutive Irishman was broadcasting with ESPN Radio for Wednesday's USA/Algeria game. I tuned in fairly late for that one (vuvuzelas and all) and it appeared for all the world that the USA would be eliminated from the tournament with a scoreless draw. And that's how it would end in regulation- but there was three minutes of injury time remaining and throughout the second half, the announcers were commenting on how tired the Algeria players were looking. Algeria's goalkeeper Rais Mbolhi gave up a rebound in the 91st minute when USA Midfielder Landon Donovan finally booted one past Mbolhi for the only goal of the game. The win means that Team USA advances to play Ghana in the next round on Saturday.

Elsewhere in the World Cup: Argentina took down Greece 2-0 Tuesday in the 'self-inflicted-economic-ruin' Pool of the FIFA World Cup. 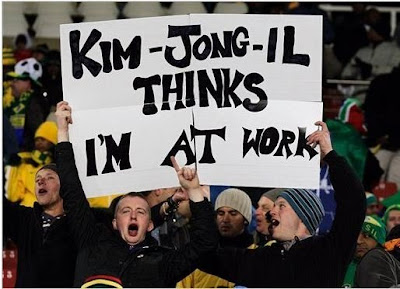 In a schadenfreude-tastic moment, Portugal beat the ever lovin' shit out of North Korea by a total of 7-0 on Monday. Apparently the Kim Jong Il endorsed Juche ideal of insular self-reliance is no match for a moderately talented (and well fed) team from a Western European liberal democracy. It reportedly got so bad that at one point, the Chinese fans the North Korean regime paid to travel to South Africa renounced their North Korean citizenship that they never had. 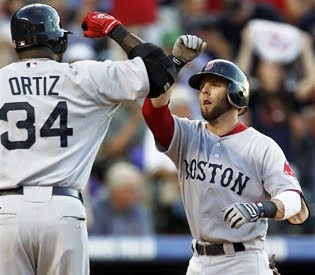 MLB: After dropping the first two games against the Colorado Rockies in Denver, the Red Sox managed to avoid the three game sweep in extra innings on Thursday night [better at this late date than in October 2007, I suppose- NANESB!]. Papelbon failed to seal the deal in the bottom of the 9th, giving up a one out 2-RBI single to Brad Hawpe to tie the game at 11-11. Having said that, there's something in the Colorado air that seems to agree with Dustin Pedroia.

Dustin Pedroia put the Sox up 13-11 with 2-out 2 run homer in the top of the tenth off of Huston Street- Pedroia's 11th inning dinger was his third of the night, going 4 for 5 with 5 RBI on the night. 3B Adrian Beltre was a respectable 3 for 4 with 3 RBI and a homer of his own. Papelbon had a 1-2-3 bottom of the tenth to hang on for the win.

The Sox will head back to sea-level tomorrow night where they take on the San Francisco Giants in the City (and ballpark) by the Bay. Tim Wakefield (2-5; 5.33 ERA) is expected to go up against Jonathan Sanchez (5-5; 2.90) for Friday night's game.

Other Red Sox News: 20-year old Red Sox prospect Ryan Westmoreland, along with his rather Ron and Sox GM Theo Epstein, spoke to reporters in a conference call. Westmoreland announced that he does plan on returning to baseball and has taken an "all-business" approach to rehab. Ron Westmoreland said that Ryan was able to walk around on his own power the day after his surgery on a cavernous malformation of his brain back in March. The Westmorelands have actually attended games at Fenway Park and Pawtucket's McCoy stadium this season.

WIMBLEDON: Like the World Cup and soccer, I don't normally follow tennis that much. Having said that, the match between the USA's John Isner and Frenchman Nicholas Mahut was one for the ages as Isner defeated Mahut by a final of 70-68 in the fifth set, with the match clocking in at 11 hours and 5 minutes spanning over three days. On the first day, the match was suspended on account of darkness and was eventually moved to one of the courts on the periphery of Wimbledon. Three-time Wimbledon champ John McEnroe was present for all 20 of Thursday's games between Isner and Mahut.

This epic matchup broke pretty much every record in the book on the very same day the Queen of England visited Wimbledon for the first time in 33 years.

NBA: The Celtics chose Texas guard Avery Bradley with their first round (19th overall) selection in the 2010 NBA Draft. Notre Dame forward Luke Harangody was selected in the second round- 52nd overall.
Posted by Fenway_Nation at 10:15 PM