Wow....where does the time go? To be honest, I was more than a little embarrassed at the Red Sox getting swept by Baltimore last weekend (hell- wouldn't you be?) as well as the C's lackluster performance in Game 1 against the Cavs. The only silver lining last weekend was the Bruins taking the opening games from the Flyers, although not before Philly rallied from 2 goals down to tie the game and send it into overtime.

However, everything from Monday onwards has been gravy for the teams inside the Hub. Again, this is one of those deals where us Boston sports fans should savor it while it lasts, since not every week is going to be good for the Boston teams.....at least simultaneously. Unfortunately (or fortunately, depending on how you look at it), due to some real-world obligations, I was able to catch very little of the action after Monday night and only update the blog infrequently. 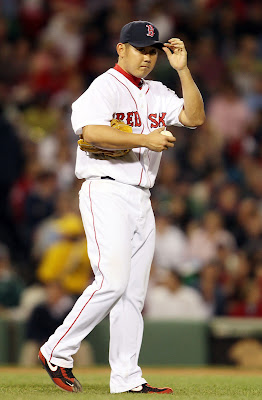 MLB: No point in complaining about how come the Sox couldn't show similar signs of life against the Angels back in October. A four game sweep is a four game sweep- and as Patriot's Day weekend has shown, it's better to be the ones holding the broomhandle than to be the ones caught up in the bristles.

While swivelling my head to catch the Bruins and Celtics at my friendly neighborhood watering hole, I saw that the Red Sox managed to put up 17 runs on the Angels Monday night...and while last week's series opener against the Blue Jays saw the Sox reach double-digits, this one was nowhere near as close with Boston getting the 17-8 win.

Turns out that wouldn't be the only time the Sox put up double-digits against the Angels this week. After taking Game 1, the Red Sox took the next two games (all while putting less than 10 runs on the board) which led to today's game and Daisuke Matsuzaka's first start at Fenway this year.

Dice-K was wild in the first, giving up 4 runs in the top of the 1st inning, but would go on to settle down and retire 13 of the last 16 batters he faced. The Red Sox would start to rally (no simians involved this time) with a 2-run Victor Martinez homer in the bottom of the 3rd and a 5 run bottom of the 5th (including 2 more RBIs on a double from Martinez) to take a 7-4 lead before the Angels came back with 2 of their own on a Mike Napoli home to make it a 1-run game in the top of the 6th. But Boston would get some insurance in the bottom of the inning with a bases-loaded walk to JD Drew followed by a Beltre RBI-single, Jeremy Hermida reaching on a Howie Kendrick fielding error with the bases loaded and Darnell McDonald grounding into a fielder's choice to bring in Drew to put Boston up 11-6. Manny DelCarmen, Hideki Okajima and Ramon Ramierez closed out the game for the Sox.

The Sox travel to the toilet Bronx tonight to take on the Yankees tonight with Josh Becket going up against Phil Hughes.

Other MLB News: Longtime Detroit Tigers broadcaster Ernie Harwell passed away on Tuesday at age 92. Harwell had been with the team for 40 years, finally retiring in 2002. But even after retiring, Harwell would occasionally call a few innings during some regular season Tigers games as well as the 2005 All Star game at Comerica Park and Detroit's appearance in the 2006 World Series for ESPN Radio, Fox and Fox Sports Detroit. Ernie Harwell announced late last year that he had inoperable cancer. He is survived by his wife of 68 years, Lulu, four children and seven grandchildren.

Harwell was the recipient of the Baseball Hall of Fame's Ford C Fricke Award in 1981 in which he delivered the following speech:

Baseball is the President tossing out the first ball of the season and a scrubby schoolboy playing catch with his dad on a Mississippi farm. A tall, thin old man waving a scorecard from the corner of his dugout. That's baseball. And so is the big, fat guy with a bulbous nose running home one of his 714 home runs.

There's a man in Mobile who remembers that Honus Wagner hit a triple in Pittsburgh forty-six years ago. That's baseball. So is the scout reporting that a sixteen year old pitcher in Cheyenne is a coming Walter Johnson. Baseball is a spirited race of man against man, reflex against reflex. A game of inches. Every skill is measured. Every heroic, every failing is seen and cheered, or booed. And then becomes a statistic.

In baseball democracy shines its clearest. The only race that matters is the race to the bag. The creed is the rulebook. Color merely something to distinguish one team's uniform from another.

Baseball is a rookie. His experience no bigger than the lump in his throat as he begins fulfillment of his dream. It's a veteran too, a tired old man of thirty-five hoping that those aching muscles can pull him through another sweltering August and September. Nicknames are baseball, names like Zeke and Pie and Kiki and Home Run and Cracker and Dizzy and Dazzy.

Baseball is the cool, clear eyes of Rogers Hornsby. The flashing spikes of Ty Cobb, an over aged pixie named Rabbit Maranville.

Baseball just a came as simple as a ball and bat. Yet, as complex as the American spirit it symbolizes. A sport, a business and sometimes almost even a religion.

Why the fairy tale of Willie Mays making a brilliant World's Series catch. And then dashing off to play stick ball in the street with his teenage pals. That's baseball. So is the husky voice of a doomed Lou Gherig saying., "I consider myself the luckiest man on the face of this earth.”

Baseball is cigar smoke, hot roasted peanuts, The Sporting News, ladies day, "Down in Front", Take Me Out To The Ballgame, and the Star Spangled Banner. 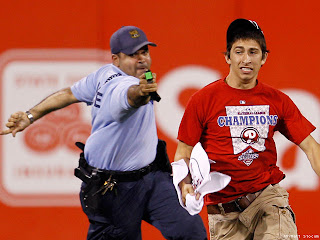 From City of Brotherly Love to "Don't Tase Me Bro!" : Controversy erupted at a Philadelphia Phillies home game on Monday night when Philadelphia Police tasered 17 year old fan Steve Consalvi as he was sitting quietly in the stands, minding his own business. Wait...what? Oh....Mr. Consalvi was tasered after running out onto the field and eluding security. I guess I'm supposed to be wringing my hands over 'excess force' or something, but wouldn't you know it? My give-a-damn broke the second Consalvi started running around on the field.

NBA: It's been awhile, hasn't it? The Celtics lost game one to the Cavs last weekend before they came roaring back in game 2 Monday night. Ray Allen led the C's scoring with 22 points while Rajon Rondo tied a C's playoff record with 19 assists and Kevin Garnett had 10 rebounds. Boston scored early and often, heading into halftime with a 52-48 lead. From there on out, it was pretty much all Celtics, all the time with Boston outscoring the Cavs 31-12 in the 3rd and taking a 25 point lead into the 4th. Cleveland would cut into the lead and make it appear close, closing the gap to 10 points with just over 3 minutes left. But Boston would close out the game with an 11-3 run for the 104-86 win, which ties the series at one game each.

That was Monday night- Game 2 isn't until tonight at the Garden.

Other NBA News: The Los Phoenix Suns generated some controversy this week by sporting 'Los Suns' jerseys in their playoff game against San Antonio on May 5th. While Arizona's recent anti-illegal immigration measure has brought Arizona and its capital increased public attention, apparently the 'Los Suns' jerseys were part of an already existing Cinco de Mayo promotion to draw in Hispanic viewers and fans in Arizona that's already been in place for a few seasons. The San Diego Padres routinely market south of the border, while the LA Dodgers have a large Hispanic following and the Angels are actually owned by an American of Mexican descent. So one shouldn't be too surprised if pro teams in another border state also begin marketing to the sizable Hispanic population as well.

Having said that, I have no problem with the Arizona law and I think noted US Constitutional scholar Phoenix guard Steve Nash has no idea what he's talking about when interviewed by ESPN's unfunny excuse of a whatever he is Tony Kornheier this week:

"I'm against it. I think that this is a bill that really damages our civil liberties and I think that it opens up the potential for racial profiling, racism. I think it's a bad precedent to set for our young people, I think it represents our state poorly in the eyes of the nation and the world. I think we have a lot of great attributes here and I think that it's something we could do without and hopefully will change a lot in the coming weeks."

Well now...since you put it that way, Steve, how about the Suns take the high road and have 'Amnesty Night'. Since somebody asking to see papers (whether it's a visa, passport, driver's licence or Suns tickets) sets a bad precedent and violates civil liberties, anybody who shows up at the arena should just waltz right in and plunk themselves down wherever they want- the broadcast booth, the 3 point line or even the owner's suite. Of course, the concessions should be free and all you can eat as well. Now, since 'Amnesty Night' is a pretty expensive proposition, I don't think that players like Nash will mind if Suns management takes some money from Nash's paycheck to cover the costs of throwing the doors open to anybody who wants to show up.

NHL: In what seems like the blink of an eye, the Boston Bruins are up 3-0 in the Eastern Conference Semifinals against the Philadelphia Flyers. I caught some of Game 2 Monday night when I wasn't swivelling my head around to look in on the C's and Red Sox, and I caught some of Game 3 the other night when the Bruins already had a 3-1 lead. Apparently Philly scored first for their only lead of the series so far in the first. Boston would answer right back with two goals, one from Blake Wheeler and one from Miroslav Satan less than 2 minutes apart late in the first to give the Bruins a 2-1 lead. Mark Recchi added to the Boston lead early in the 3rd and Patrice Bergeron would get an empty-netter with just under two minutes left in the 3rd to make it a 4-1 win for the Bruins.

The Bruins will start game 4 tonight without the services of David Krejci who had his wrist dislocated in Game 3 and Marco Sturm left game one with a torn MCL and ACL in his right knee. Both are expected to be out for the remainder of the season.
Posted by Fenway_Nation at 10:57 AM