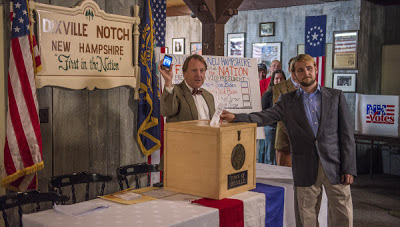 Just wanted to post a quick update that I will be travelling to my nearest friendly neighborhood swing state on the day leading up to the November 6th Presidential election, volunteering for the Romney/Ryan campaign.

While I figured my vote for Romeny/Ryan in my perpetually bankrupt and dysfuntional dark blue state wouldn't make much of a difference, I thought that I could perhaps offset that by spending time with other volunteers at the Romeny/Ryan campaign offices in a much more competitive state up the road. This was a last minute decision on my part, as I was uncertain about the roadworthyness of my car, not to mention the best route and travel time to the aforementioned swing state as well as my work schedule for the remainder of this week.

I will likely be doing alot of travelling on Election Day itself, but I have already voted by absentee ballot last week. As I'm writing this, the first polls are getting set to open in the tiny village of Dixville Notch, NH in about an hour.

Right now, there isn't a whole lot to do but encourage the few who are still sitting on the fence to go out and vote tommorrow and hope for nothing short of a Romney win beyond what columnist Mark Steyn referred to as 'The Margin of Lawyer'- a reference to the razor thin margin of the 2000 Presidential election.