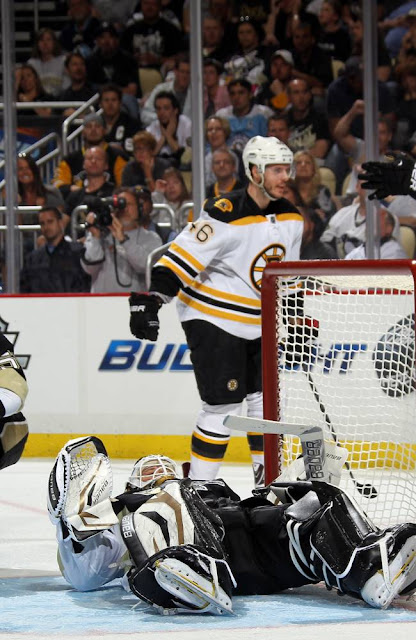 STANLEY CUP PLAYOFFS- The Eastern Conference Finals got off to a good start for the Bruins on Saturday evening as David Krejci got Boston on the board just over 8 minutes into the first period with an even-strength goal that beat Pens netminder Tomas Vokoun.

While there was no scoring in the second period, the game took a turn for the feisty when Boston archenemy Matt Cooke was given a five minute major and ejected after his hit from behind on Adam McQuaid.

With the Bruins still leading 1-0, period number two closed out with a scrap between Evgeni Malkin and Patrice Bergeron. This was in addition to Penguins Captain Sidney Crosby jawing skyward at Boston Captain Zdeno Chara- although, sadly, the altercation didn't become physical.

Four minutes into the third period, the Bruins doubled their lead over the Pens thanks again to David Krejci. Right before the eight minute mark, Nathan Horton decided he wanted to get in on the action and beat Vokoun to make it a 3-0 lead, giving the Bruins even more insurance not even halfway through the 3rd period. However, given Rask's outstanding performance in net Saturday night, Krejci's first goal would be all the Bruins needed. Boston takes Game 1 of the Eastern Conference Finals from Pittsburgh in the Consol Energy Center by a 3-0 final. Tukka Rask turned aside all 29 shots he faced on Saturday while stopped 27 of 30 shots faced. Both teams went 0-4 on the power play, as well.

Game 2 will get underway on Monday night from Pittsburgh at 8:00 ET and will be televised on NBC Sports or the CBC depending on where you're trying to watch the game from.

ELSEWHERE IN THE STANLEY CUP PLAYOFFS- After trailing early to Los Angeles, the Chicago Blackhawks scored two unanswered goals to go on and win by a 2-1 final in Game 1 of the Western Conference Finals.

Marian Hossa scored late in the second for the game-winning goal and Corey Crawford stopped 21 of 22 shots faced in the Blackhawks Game 1 win on Saturday afternoon. Game 2 will get underway on Sunday at 8:00 ET and the contest will be televised on NBC Sports Network and TSN. 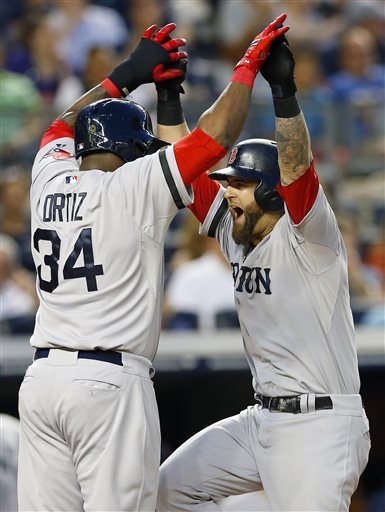 Although he came into Saturday night's game with a high ERA, Boston starter Felix Doubront had a winning record and his career ERA against the Yankees (2.78 heading into tonight) than his career ERA of 4.86.

Doubront struggled early, walking three batters and allowing two hits in the first two innings, but the Yankees were unable to capitalize on those opportunities.

It was a different story for the Red Sox though- Jackie Bradley Jr led off the top of the 3rd with a double, followed by a sinfle from Daniel Nava. Mike Carp then got the Red Sox on the board with an RBI double to make it 1-0 Boston. After Hughes struck out Pedroia, the decision was made to intentionally walk David Ortiz. With the bases loaded, the Mike Napoli made the Yankees pay for that by belting a 2-2 Hughes offering into the bullpens in right-center field. The grand slam put Boston up by a score of 5-0.

The Yankees got a run back in the bottom of the 4th on a sac fly, but Boston would blow the game wide open in the top of the 8th with a 3-run Daniel Nava homer. The Red Sox would touch up the Yankees bullpen for three more runs (including a Stephen Drew solo homer) for an 11-1 win. This evens up this weekend's series at 1-1, with the rubber game set for Sunday night with Clay Buchholz [7-0, 1.73 ERA] against Hiroki Kuroda [6-3; 2.39 ERA]. The game will be televised nationally on ESPN's Sunday Night Baseball with first pitch scheduled for at 8:05 PM ET.

NCAA BASEBALL- After winning their first Big East baseball title in nearly 20 years, the UConn Huskies advanced to the NCAA regionals in Blacksburg, VA. After winning the opening game against host Virginia Tech on Friday by a 5-2 final, the Huskies were downed by the Oklahoma Sooners in 12 innings by a 5-3 final.

The Huskies will face a rematch with Virginia Tech on Sunday in the double elimination tournament- a loss means that a trip to Omaha is out of the question while a win still puts them in the hunt.

UConn is the only Division I New England school to qualify for the NCAA baseball tournament this season.
Posted by Fenway_Nation at 10:43 PM