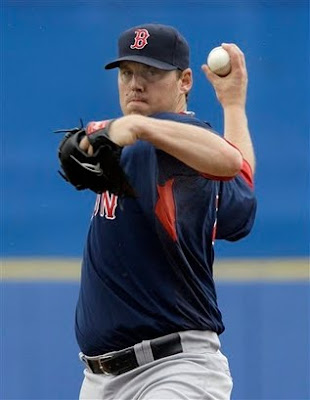 John Lackey allowed just three hits in three shutout innings for the Red Sox in their 8-2 win of the NY Mets Thursday at the Mets facility in Port St. Lucie, FL. JD Drew and Jeremy Hermida each had an RBI single in the 1st inning for Boston off of Mets starter Mike Pelfrey and Mike Cameron had a sac-fly.

Former Pirate and Red Sox outfielder Jason Bay went 0-2 before leaving the game in the 4th during a half hour rain delay. This marks the first time Bay has played his former AL team since signing with the Mets.

The Red Sox were without the services of Mike Lowell, who was listed as having a thumb injury- but is expected to start Monday against Baltimore. Mets SS Jose Reyes is supposed to refrain from any athletic activity until his thyroid levels return to normal, which is expected to take anywhere from 2 to 8 weeks.

Friday's game between Boston and St. Louis was postponed due to inclement weather. 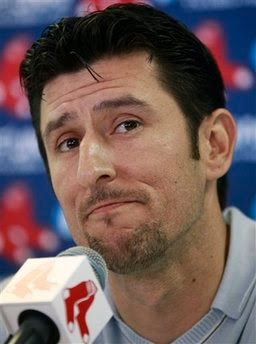 GOODBYE NOMAR: Former Red Sox SS Nomar Garciaparra signed a ceremonial 1-day contract with the Red Sox before announcing his retirement at a press conference on Wednesday. Garciaparra said that he's retiring from baseball at age 36 to become a baseball analyst on ESPN. During his career in Boston, Garciaparra garnered the '97 Rookie of the Year honors as well as 5 All Star appearances and a Silver Slugger award.

In 2004 Garciaparra was dealt to the Chicago Cubs at the trade deadline in exchange for Montreal Expos SS Orlando Cabrera and Minnesota Twins 1B Doug Mientkiewicz. By 2006, NoMAH left the friendly confines of Wrigley and remained with the Dodgers through the 2008 season. Last year, he signed a 1-year contract with the Oakland A's. Nomar retires with a career .313 batting average, 229 home runs & 936 RBI.

Thank you for some memorable seasons and here's to a happy retirement, #5.

NHL: After losing Denis Savard for God-knows-how-long thanks to a concussion suffered on a cheap shot at the Igloo over the weekend, dropping a game to the last-place Maple Leafs wasn't exactly and encouraging sign for the Bruins. Yet that's exactly what happened on Tuesday night, although they did take the game to OT, which earned them a single point in the standings.

Thursday night at Philadelphia was a different story, however. Coming into Thursday night's game, the Flyers were riding a 5-game winning streak. This also marks the first time Boston and Philly had met since the New Year's Day Winter Classic.

Blake Wheeler opened up the scoring for Boston after taking a center-ice shot from David Krejci and flipping it over Philly netminder Michael Leighton's right shoulder to give Boston the 1-0 lead.

Jeff Carter would get the equalizer for Philly on a power play goal less than a minute into the 2nd period, beating Tukka Rask. However, it would be the only goal Rask would give up. Basically, it was 4-1 Boston by the time I was able to tune in, with goals by Mark Recchi, Patrice Bergeron and David Krejci in the 2nd. Marco Sturm was able to add to the tally at the 12 and a half minute mark of the 3rd for the 5-1 Bruins win. Rask stopped 31 of 32 shots faced and the Bruins currently are in the 8th and final playoff spot in the Eastern conference.

The Bruins will take on the Canadiens Saturday Night at Montreal [A CBC Hockey Night in Canada match, I believe- NANESB!]. Montreal remains 2 points ahead of Boston in the conference standings, and lord knows the B's could use some breathing room if they want to make the playoffs. Plus, it's Original 6 hockey....what's not to love?

NBA: Bruins weren't the only Boston team that was off to a crap-tastic start this week. Tuesday night, the Milwaukee Bucks held on to beat Boston 84-86 while Ray Allen was 0 for the evening. And aside from the fact that it was the first time in nearly 4 years that the Celtics lost to Memphis, the less said about Wednesday night's 20-point spanking at the hands of the Memphis Grizzlies in the Garden, the better.

On Friday night, they were able to snap their 2-game skid in convincing fashion, taking down the Indiana Pacer 122-103 in the Garden. Paul Pierce had 20 points and was 5 for 5 from the free-throw line in 22 minutes of play. Rajon Rondo had 16 points and 11 assists before sitting out most of the 4th quarter. Ray Allen got off the schnide with 13 points, 4 rebounds and 3 assists in a little over 28 minutes of playing time Friday.

The C's will travel to Cleveland for a Sunday afternoon game against the Cavaliers. The Cavs have won 4 of their last 5 games- curiously, their only loss is against the Bucks.
Posted by Fenway_Nation at 11:22 PM