Iron Horse Roundup For May 2013

CONNECTICUT- Rail service along the Northeast Corridor between New York City and New Haven after a May 17th derailment and collision that injured 72 people at the height of the evening rush hour.


National Transportation Safety Board officials are looking into a broken part of the rail that underwent repairs last month, but have not determined whether it was a pre-existing fracture or if it occurred as a result of the accident, according to NTSB spokesperson Earl Weener, who provided an update at a news conference on Saturday afternoon.

NTSB officials arrived on the scene on Saturday morning to begin investigating the cause of the train crash, injuries sustained by the commuters and operator performance.

The NTSB's investigation could take seven to 10 days but that does not mean that service shutdown will take that long, board spokesman Earl Weener said..

The eastbound Metro-North train derailed just after 6:00 p.m. and was hit between the Bridgeport and Fairfield stations, officials said.

"We came to a sudden halt. We were jerked. There was smoke," Alex Cohen, a Canadian passenger on the westbound train en route to New York, told NBC Connecticut.

"People were screaming; people were really nervous. We were pretty shaken up. They had to smash a window to get us out," he said.

St. Vincent Hospital in Bridgeport, Conn. said on Saturday that it saw a total of 46 patients, six of whom were admitted for treatment. All patients remained in the hospital and were reportedly in stable condition.

Bridgeport Hospital saw 26 patients and admitted three. Two of those patients were in critical condition a day after the accident, and one was in stable condition, according to The Associated Press.

The FBI has ruled out foul play early into the investigation while the NTSB is focusing their probe on a possible fractured rail that could have derailed the first train. The Northeast Corridor opened on a limited basis by Tuesday as the NTSB investigation continued.

Between commuter service and intercity passenger service, the Boston-New York-Philadelphia-Baltimore-Washington DC Northeast corridor is the busiest stretch of passenger track in the United States. The Connecticut derailment posed a massive bottleneck for the New York-Boston portion of the Northeast Corridor, with many trains cancelled and some being replaced by bus service for the duration of the closure. 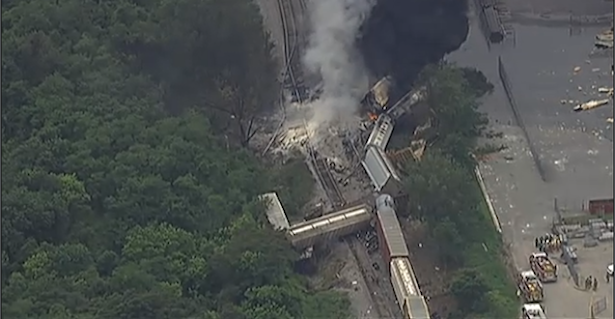 MARYLAND- Suburban Baltimore was rocked by a massive explosion on Tuesday after a CSX freight train collided with a truck and derailed. The train was reportedly carrying sodium chlorate- a bleaching agent used in the papermaking process. A CSX spokesman confirmed that the train was carrying the sodium chlorate, but denied that it was in any of the derailed cars.

Reports indicate that the trucker- who also owned the waste hauling company- was hospitalized and in serious condition but there were no reports of injuries among the train crew or the public. The force of the blast damaged nearby warehouses, but Baltimore county fire officials reportedly had the blaze under control.

The NTSB and Maryland State Police are focusing on the safety record of the trash hauling truck involved in the collision.


As cleanup crews and investigators worked at the crash site in the eastern Baltimore suburbs, NTSB board member Robert Sumwalt gave what he said was the agency's last local news conference on the Tuesday derailment. He said the agency has looked at federal transportation department safety records for Alban Waste and found an above-average number of violations resulting in trucks being ordered off the road.

Records of the Federal Motor Carrier Safety Administration show the company that has three trucks was involved in two crashes with injuries in 2012 and 2013. The agency's website also shows the company's vehicles were inspected 43 times in the last two years, with trucks being ordered out of service in about 40 per cent of those cases. The national average is about half that.

The 45-car CSX train crashed into the trash truck driven by company owner John J. Alban Jr. Sumwalt had said investigators planned to interview Alban Jr., who remained in serious condition Thursday at a hospital. His was the only injury in the derailment, explosion and fire that sent a plume of black and grey smoke into the air that could be seen for miles.

A new video of the crash, captured by a nearby business's surveillance camera, shows Alban Jr.'s truck approaching the crossing before the train is in sight, driving away from his business. Without stopping, the truck heads across the tracks as the train approaches. The truck appears to get mostly across before the lead CSX locomotive slams into it. The impact wraps the truck's white cab and a portion of its trailer around the side of the train, and the train drags the wreckage forward. The video appeared first on the Baltimore News Journal website.

Sumwalt said the video was helpful to investigators.

He said the train was going 49 mph, just below the speed limit of 50 mph on that track section.

Other Motor Carrier Safety Administration records obtained by The Associated Press show Alban Waste failed a safety audit in November 2011 due to file-keeping problems regarding drivers' qualifications, a random drug and alcohol testing program and maintenance reports. The company notified the agency in March 2012 of its actions to correct those problems. Other federal records show violations over the last two years including brake and light problems to tire and seat belt violations.

Capt. Norman Dofflemyer, commander of the Maryland State Police Commercial Motor Vehicles Division, said the federal trucking regulatory agency has asked his office to help review the company's compliance with federal regulations. He said that even before the crash, "they were approaching a threshold that would have triggered a notice that we should start looking at the company through the compliance program."

The company is located a short distance from the crossing where the collision occurred. The road to the business crosses the railroad tracks, separating Alban Waste from the rest of an industrial neighbourhood off Interstate 95.

Alban Jr. was ticketed May 25 in Baltimore County for failing to properly secure a roll-on container to his truck and convicted earlier on the same charge. He is awaiting trial July 19 on a speeding ticket. His license was suspended for about a month on March 25 after he failed to either pay the fine or ask for a court date. When he requested a court date April 23, the suspension was lifted. Alban Jr. was convicted of using a hand-held cellphone while driving in June 2011 in the city of Baltimore.

Sumwalt said the NTSB will review cellphone records as a routine part of the investigation.

The collision is said to have caused an estimated $625,000 in damages and the road leading into Alban's company was blocked off by the train derailment. 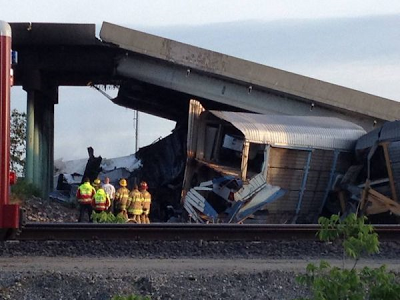 MISSOURI- An highway overpass in southeastern Missouri was brought down this week after a collision between Union Pacific and BNSF freight trains.

Seven people were injured Saturday morning in a massive train collision in Scott County that took down an overpass.
Officials say that around 2:30 a.m. there was a train crash near County Road 210 and Highway M in the Rockview community. The Highway M overpass collapsed on impact.

Scott County Sheriff Rick Walter says a Union Pacific train T-boned a BNSF Railway train that had just made it through the intersection.

The collision caused one of the trains to derail and hit a pillar under the overpass causing it to collapse. A dozen Union Pacific train cars derailed.

Trooper Clark Parrott with the Missouri Highway Patrol says two vehicles were not on the bridge when it collapsed. The cars came up on the bridge as it went down.

Three people in one vehicle, and two people in another vehicle, were taken to a nearby hospital.

One of the drivers, Christopher M. Cantrell, 22, of Benton, Missouri, received minor injuries.

The Union Pacific engineer and conductor were pulled from the wreckage and treated at a nearby hospital. According to the Union Pacific, the train was hauling automobiles between Illinois and Arlington, TX.

According to the Missouri Department of Transportation, the highway overpass sees an average of more than 3000 vehicles daily while the span itself weighs more than 370 tons. Removal of the collapsed bridge is expected to cost nearly $3 million.
Posted by Fenway_Nation at 10:23 PM