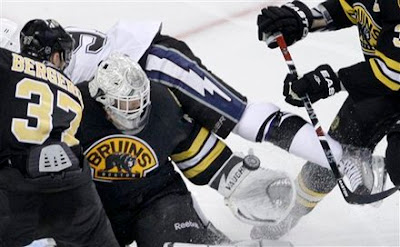 And I don't mean this Seven's, either [although if you happen to be in Beacon Hill, I highly recommend stopping by- NANESB!]

The Bruins put the finishing touches on a perfect 6-0 road trip on Tuesday night thanks to a shutout performance by Tukka Rask backed by a single goal from Nathan Horton in the 3rd period in Ottawa on Tuesday night.

On Thursday night, they would try and make it 7 wins in a row with their first home game since the day after Valentine's Day against the Southeast Conference leading Tampa Bay Lightning.

If the Bruins wanted to make it 7 wins in a row, they would have to climb out of a 1-0 hole to do it. Eric Brewer broke the scoreless deadlock 4 minutes into the 2nd period with a goal to put Tampa Bay on to 1-0. Pruins call-up Steve Kampfer managed to knot the game at 1-1 about 2 minutes later and the contest would enter the 3rd period that way.

Although he was pulled in an earlier contest against Boston, Lightning goalie Mike Smith had a pretty strong showing on Thursday night. However, with 3:42 left in regulation, Milan Lucic was able to get a bouncing puck past Smith to make it a 2-1 game. The Bruins were able to hold off a late charge from Tampa Bay after the Lightning pulled Smith and hung on to win by the final of 2-1, good for their 7th win in a row.

Tim Thomas stopped 27 of 28 shots faced while Tampa's Mike Smith turned aside 26 of 28. The win vaults Boston past Tampa for 2nd place in the Eastern Conference, 3 points behind Philly (who lost to Toronto on Thursday). The Bruin's next game will be at 7PM ET on Saturday night at Pittsburgh's Consol Energy Arena against the Penguins.

NBA: The Celtics homecoming on Wednesday night wasn't quite as triumphant as the Bruins, but they came out on top nonetheless. At first blush, the C's 115-103 win might've looked like a commanding performance (and it was, taking a 20 point lead into halftime), but Boston had to hold off a late rally from the Phoenix Suns, with the visitors threatening to close the gap to less than 10 points late into the 4th.

Kevin Garnett played like a man with something to prove (imagine that) racking up 28 points and 11 rebounds against Phoenix. Ray Allen had the next highest point total with 19 in Wednesday night's win.

The C's next game will be at home in Friday night against the Golden State Warriors at 7:30 PM ET

MLB: Friday marks the first contest between the Boston Red Sox and NY Yankees at New York's Spring Training facility in Tampa, FL. Both teams are coming into Friday's game sporting a 2-3 record. Bartolo Colon will be auditioning for a slot in the Yankees rotation while Clay Buchholz will get the start for the Sox.

After a high profile and ugly feud with manager Ozzy Guillen, former White Sox closer Bobby Jenks made his Red Sox debut in Thursday's 2-0 loss to Philly, allowing a hit and not earned runs.

Josh Beckett is back and will likely throw a bullpen session on Friday and may start another game as early as Tuesday. During his return to City of Palms park, Beckett presented coaching assistant Ino Guerrero (his 'assailant' after getting hit in the head w/a ball during BP and treated for mild concussion symptoms) with a fluorescent orange construction worker's vest.