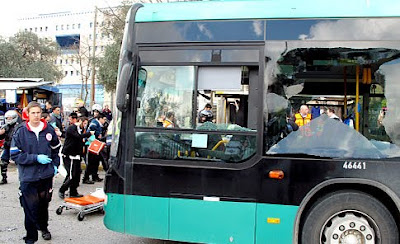 A 60 year old Israeli woman was killed and at least 35 commuters were wounded when a bomb ripped through a downtown Jerusalem bus stop on Wednesday.

Israeli investigators say that the bomb likely was left inside an unattended bag at a phone booth near the bus stop and consider the bombing an act of terrorism.

The Jerusalem bombing comes a few days after mortar attacks on an Israeli border town from the Hamas-held Gaza Strip. The IDF had retaliated with tank fire and air strikes.
Posted by Fenway_Nation at 4:19 PM