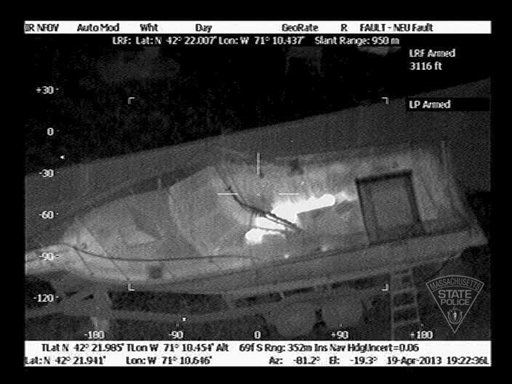 A little less than a week after Boston Marathon bombing suspect Dzhokhar Tsarnaev was taken into custody after a dramatic chase and shootout, several new facts about the two brothers are coming to light from investigators and victims alike.

Although Tamerlan Tsarnaev had sustained multiple gunshot wounds during last week's chase and shootout, he was reportedly brought down by his own kid brother who ran him over in a stolen vehicle while attempting to flee the police.


Chief Deveau also disclosed dramatic details of the shoot-out, in which Tamerlan was killed, and revealed how, in the chaos, his death was caused by Dzhokhar.

A single officer was first to encounter the fugitives at 12.30am local time on Friday in a residential street in Watertown, a suburb of Boston.

They were in two separate vehicles, including a four-wheel-drive Mercedes they had carjacked.

Chief Deveau said: “They jump out of the cars and unload on our police officer. They both came out shooting. Shooting guns, handguns. He’s under direct fire, very close by.

“He has to jam it in reverse and try to get himself a little distance.”

As five other officers arrived, 200 shots were fired in 10 minutes. One of the brothers threw exploding devices including a pressure cooker bomb which landed on a car.

Tamerlan then broke cover and walked directly at officers firing a gun. The police chief said: “They were having a gunfight 10 feet apart. And then for us, thank God, he ran out of ammunition. He runs out of ammunition, the bad guy, and so one of my police officers comes off the side and tackles him in the street.”

As they tried to handcuff him, Dzhokhar drove the Mercedes straight at them but missed the police, hitting his own brother and dragging him 20ft before racing off.

Chief Deveau said: “The officers dive out of the way and he (Dzhokhar) drives over his brother and drags him a short distance down the street.”

Doctors said Tamerlan had injuries “head to toe”. There were so many they did not know which one had killed him.

The brothers were found to have had six improvised explosive devices including a satchel bomb, handguns, a rifle, 250 rounds of ammunition, and home-made grenades.

This has led to a number of Boston-area sports stations referring to Tamerlan as 'Speed Bump'- a practice that I shall likely emulate.

When their identities were first revealed to the world last week, media outlets had reported that Speed Bump complained on social media that he had no American friends while living in Cambridge. Some had pointed out he had one American friend from the gym, but he was brutally killed a few years ago in an unsolved triple homicide. This was brought up in the context that the murder might've contributed to Speed Bump's increased isolation while in America, even though circumstantial evidence is indicating that Speed Bump may have butally murdered his only American friend along with two others.

Police in Waltham, MA suspect that Tamerlan- the older of the two brothers- may have been responsible for a brutal 2011 triple slaying in that town. The bodies were found on September 12th, 2011 and all three victims had their throats cut. Police say there was no signs of forced entry and the assailant was let in by somebody in the apartment that likely knew the killer. They also ruled out robbery as a motive after the killer left behind several thousand dollars in cash and marijuana at the scene.

One of the victims in the 2011 murders, Brendan Mess, knew the older Tsarnaev brother from the Boston gym where they worked out and was reportedly interested in helping transition Tamerlan from boxing to mixed martial arts. The other victims included Raphael Teken and Erik Weissman. Weissman was a jew and the bodies were discovered the day after the 10 year anniversary of the September 11 attacks [acquaintances and classmates had described Dzhokhar as a happy-go-lucky pothead and Mess was known to have sold pot out of his apartment- leading me to wonder if sometime after had Speed Bump found Allah and decided to kill Mess thinking he sold pot to his kid brother- NANESB!].

Speed Bump wasn't present for Mess' funeral either, which friends and acquaintances thought was unusual at the time. Speed Bump then reportedly flew back to visit family in the Dagestan region of southern Russia a few months after the murders. Mess' ex-girlfriend was initially a suspect, but was out of town when the slayings took place. The Middlesex Country DA's office is reportedly pursuing any leads from the Boston Marathon bombing case that are related to the 2011 Waltham triple murder.

It was also believed that Dzhokhar had apparently attempted to take his own life while he was hiding on a boat surrounded by police at a backyard in Watertown, MA. The younger Tsarnaev brother reportedly sustained a gunshot wound to the throat as well as being shot in the leg- however, they're uncertain whether the throat wound came from police gunfire or if it was an unsuccessful attempt to kill himself as police closed in.

The wounded Dzhokhar was reportedly arrested by the FBI's Hostage Rescue Unit and a Massachusetts State Police Sepcial Tactics and Operations (STOP) unit and remains under guard at Beth Israel Deaconess hospital. Although he is unable to speak, he is said to be responding to written questions from investigators.

Investigators are beginning to piece together the events from the chaotic chase and shootout last week. The two Chechen brothers had reportedly ambushed MIT Campus Patrolman Sean Collier in his cruiser, killing him because they decided they needed an extra gun- although they never were able to figure out how to unholster the slain officer's service pistol.

Almost as chilling was the account from the carjacking victim- he said the two brothers told him they were the Marathon bombers and said the only reason they considered letting him live was because he wasn't American. The carjacking victim said one brother carjacked him and met up with the second brother.


“They basically said we did the Boston Marathon bombing, but the rest of their conversation is in Russian,” Miller said. ”Now, the carjack victim doesn’t speak much English and he doesn’t speak any Russian. So, he was debriefed very carefully about ‘what else could you hear they said?’

“He said the only word I recognized was Manhattan. That tripped a lot. That’s why we saw last week stopping the trains from Boston to New York, searching the trains, and the NYPD flipped on it’s network of license plate readers at all of the bridges and tunnels coming into the city and loaded all of the license plates associated with these guys, because if they were headed to New York, they wanted to make sure that that tripped before they got in.”

Miller told WBZ NewsRadio 1030 the brothers told him, “we’re not going to kill you, because you’re not American.”

The brothers then forced the victim to make several stops to pick up bombs and cash before he could escape at a gas station.

Officials in New York City believe that Times Square or other New York landmarks were potential targets for the Tsarnaev brothers before police in Massachusetts intercepted them.

Questions also abound over where the two brothers had practiced their bomb-making craft. Although its likely they received some sort of training on one of their trips back to Dagestan, Chechnya or another troubled region in southern Russia, police in Hanover, MA were responding to reports of homemade bombs being set off along Route 53 in late March, just weeks before the Marathon bombing.

The bombs were fashioned using pressure cookers packed with explosives, nails and ball bearings for maximum effect at close range. Similar devices have been used by terrorists and insurgents in India, Pakistan, Nepal, Afghanistan and Sri Lanka. In 2010, British SAS commandos raided a Taliban bomb factory in Afghanistan. Among the devices recovered were bombs fashioned out of pressure cookers.

Perhaps most infuriatingly, Speed Bump reportedly collected welfare and unemployment benefits from the Commonwealth of Massachusetts even as he and his kid brother were plotting to kill Americans. 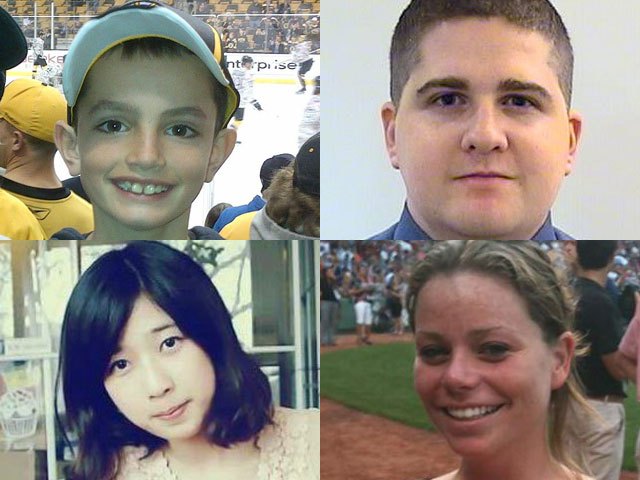 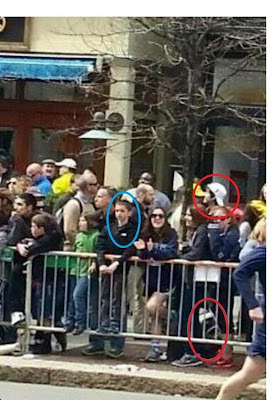 One of the last known images of 8 year old Martin Richard (blue oval). Dzhokhar Tsarnaev (red circle) is seen walking away from a backpack (red oval) believed to carry one of the two deadly bombs that tore through the crowd gathered to watch the Boston Marathon on April 15

Eight year old Martin Richard was also buried in a private funeral for his family in Dorchester on Tuesday. Richard was the youngest of the three victims from the April 15th and his sister Denise was also maimed in the attack. Photos released on twitter and by the FBI show a black backpack believed to carry one of the bombs a few feet away from Martin as he's watching the marathon and man in a white hat identified as Dzhokhar is walking away moments before the deadly bombings.

Friends and classmates also turned out to bid farewell to BU student Lu Lingzi at a memorial service on campus on Monday evening. The funeral for 29 year old Krystle Campbell- the third fatality from the April 15th bombings- was held over the weekend in Medford, MA. Members of the Teamsters Local 25 had gathered across the street to shield the mourners from unwelcome intrusions upon hearing rumors that the hateful freakshow known as the Westboro Baptist Church would be picketing the funeral.
Posted by Fenway_Nation at 10:40 PM