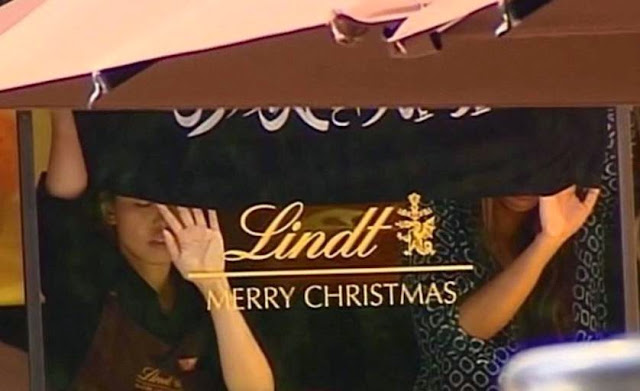 A gunman who held staff and patrons of a chocolate shop in Sydney's business district was shot and killed by police as they stormed the building in the early morning hours of Monday. However, the gunman- identified as an Iranian immigrant who went by the name of Man Haron Monis- reportedly shot and killed two of his hostages before being brought down by police gunfire.

The scene unfolded on Sunday when Monis- who was already facing charges for conspiracy to commit murder and more than 40 counts of sexual assault- stormed into the Lindt Café chocolate shop in the business district of Australia's largest city with a sawed off shotgun. Authorities were reportedly kept at bay when freed hostages claimed the self-styled 'Sheikh' had explosives. Monis also forced his captives to hold up a flag with Arabic script to the window that read "There is no God but Allah and Mohammed is his Messenger". The flag was incorrectly identified as an ISIS flag by various media outlets, but similar banners have been used by other Islamist groups such as Boko Haram out of Nigeria or Somalia's Al Shabaab. In fact, Monis had reportedly listed an ISIS flag as part of his demands, along with a telephone debate with Australian Prime Minister Tony Abbot. 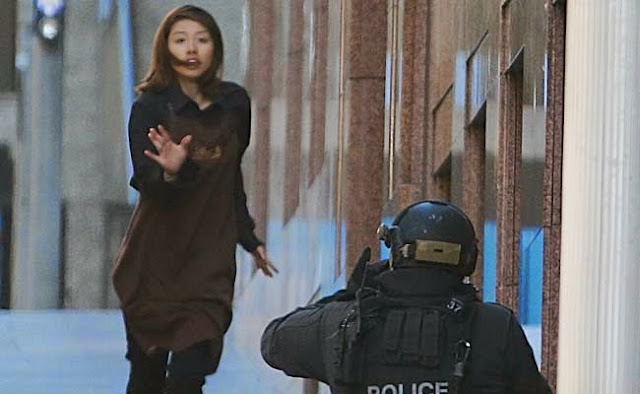 Monis was known to local police and was out on bail when he entered the chocolate shop. In addition to charges of conspiracy to commit murder in the death of his ex-wife Monis was facing at least 40 charges of sexual assault after a 27 year old woman filed a complaint with police.


In January this year, a 27-year-old woman complained to police that she had been sexually assaulted by Monis, after attending "spiritual healing sessions" in response to an advertisement placed in newspapers aimed at the Fijian-Indian, Macedonian, Spanish and Chinese communities.

That complaint triggered a police investigation, which saw Monis charged on April 14 with three sexual assault charges against one woman. The charges were sexual intercourse without consent and two charges of assault with act of indecency.

The woman was visiting him at a property in Station Street, Wentworthville, in August 2002. He appeared before Magistrate Christine Haskett at Kogarah Local Court. He was refused bail.

On May 26, he was granted bail at Parramatta Local Court by Magistrate Joan Baptie. The conditions placed on him in December 2013 were reinstated although he was to live at an address in Wiley Park.

He was due to appear in Penrith Local Court on Friday, December 12, but this was vacated and changed to February 27, 2015.

Apparently, despite being on bail for numerous serious criminal charges against him, Monis was still able to obtain a firearm in a nation with strict gun control laws. Although Monis' then-partner Amirah Drouids also faced charges in the stabbing death of Moni's ex-wife, it appears as though Monis acted on his own in the siege.

Monis also claimed that he was in contact with British Prime Minister Gordon Brown's office and sought to send "237 baskets of flowers with 237 condolence letters" to families of British soldiers killed in Afghanistan- but Australian officials prevented him from having any contact after the self-styled 'sheikh' sent poison-pen letters to families of Australian soldiers killed in Afghanistan referring to them as 'sons of pigs' no better than Hitler.

He came to the attention of police between 2007 and 2009, when he wrote poison pen letters to the families of Australian servicemen killed in Afghanistan.

During court hearings over the letter-writing, Monis claimed he was a peace activist and chained himself to the court, waving a small Australian flag.

He described his letters as "flowers of advices" [sic], saying: "From now on when I want to advise people not to kill civilians I should do it by hand delivery."

In August 2013, he was sentenced to 300 hours of community service, but refused to accept the court's verdict. Despite pleading guilty to all 12 charges against him, he appealed, claiming his trial was "politically motivated" and that his children were taken away from him.

The two murdered hostages were identified as 34 year old Tori Johnson, who was the manager of the shop and 38 year old Katrina Dawson, a mother of three. According to other hostages, Johnson was killed when he attempted to wrestle the gun away from Monis while Dawson placed herself between Monis' weapon and a pregnant colleague.