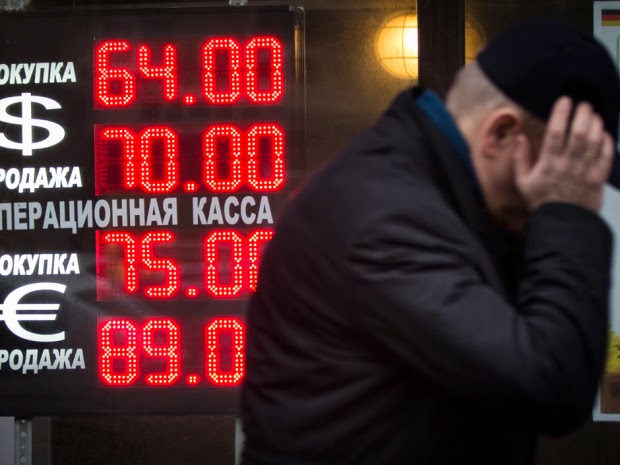 As the price of oil plummeted to below $60 a barrel on increased Saudi production, Russia's already sluggish economy took a significant hit when Russia's central bank announced they would increase the key interest rate from 10.5% to 17% in a drastic move announced earlier this week.

The move was done in part to halt the Russian Ruble's drastic slide against the Dollar and Euro- as of Wednesday afternoon, the Ruble was trading at just over 60 to the dollar [down from 68 prior to interest rate hikes- NANESB!] and just under 75 to the Euro.

Although Russia has been on the receiving end of lukewarm sanctions from the USA and European Union after Russia annexed the Crimea and parts of eastern Ukraine, it's apparent that the recently plummeting energy prices have played a role in Russia's latest economic crisis.

This leaves Putin with the difficult choice of trying to prop up the mostly resource-based Russian economy or continue his costly military campaign against the Ukraine [I'm of two minds on this- while I'm glad Putin's finally reeling after attacking a neighboring country unprovoked, let's also keep in mind that no matter how dangerous and belligerent a Kremlin flush with petrodollars was the Eastern Europe, an unstable Russia that feels it has nothing left to lose may end up being more dangerous to the region. Also, who's to say the contagion would be confined exclusively to Russia?- NANESB!].

Over the last several weeks, the implied rationale behind Saudi Arabia's increase in production was that they were attempting to undermine the fracking boom in the US and Canada, temporarily saturating the global market with cheap oil and making the labor intensive practice unprofitable for North American companies. While this strategy would mean the Saudis would lose money in the short-term, they would (in theory) benefit in the long run from reduced competition from oil shale in west Texas and North Dakota.

However, others have theorized that Russia was the intended target of a clandestine Saudi economic attack all along. With President Obama ignoring his own self-declared 'Red Line' in Syria and seeking rapprochement with Iran- despite the Islamic Republic's stated desire to obtain nuclear weapons- the Arabian kingdom has decided to act unilaterally and go after Syria and Iran's benefactor in Russia economically. If that is the case, then undercutting Russia's state-run Gazprom by flooding the global marketplace with cheap oil has proven devastatingly effective so far- moreso than tepid the tepid sanctions levied on Russia after invading the eastern Ukraine.

Whether it's to undercut Russia or the fracking boom in the USA, the Saudi strategy is sure to cause problems among other OPEC members who are just as reliant on oil as Russia and may not be able to ride out low prices like the House of Saud. Even more problematic for some OPEC nations such as Iran and Venezuela is that Russia is their primary benefactor.

The move by Russia's Central Bank comes a little over a month after Russia and China agreed to a lucrative $300B energy deal which would give China's quasi-state run China National Petroleum Corp a partial stake in west Siberian oil and gas fields. In October, China and Russia had signed an agreement to swap nearly $100B of currency, so China may be on the hook as well if the Ruble continues its collapse.

The rate increase has also triggered bickering amid Putin's inner circle and prompted many Russians swarming markets to buy goods before the prices went up.
Posted by Fenway_Nation at 3:15 PM