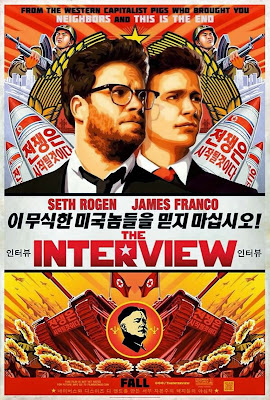 Sony Films announced this week that they were cancelling the release of the Seth Rogen comedy The Interview after the studio's emails and files were on the receiving end of a sophisticated hack.


Sony has confirmed it has no plans to release the satirical film The Interview internationally, in any form, following threats from hackers.

Cinemas in the US cancelled screenings of the film, about a plot to kill North Korea's leader, prompting Sony to shelve it altogether.

But there has been dismay in Hollywood, with Ben Stiller calling the move "a threat to freedom of expression".

Hackers had issued a warning to cinema-goers who planned to watch the movie.

Sony said it was "deeply saddened at this brazen effort to suppress the distribution of a movie".

"We respect and understand our partners' decision and, of course, completely share their paramount interest in the safety of employees and theatre-goers," the studio said.

It added: "We stand by our film-makers and their right to free expression and are extremely disappointed by this outcome."

The cancellation comes after hackers calling themselves Guardians of Peace released emails and data stolen from Sony in late November.

In a later warning to cinemas screening The Interview, they referred to the 9/11 attacks, claiming "the world will be full of fear".

"Remember the 11th of September 2001. We recommend you to keep yourself distant from the places at that time," the hacker group wrote, in a message on Tuesday.

"Whatever comes in the coming days is called by the greed of Sony Pictures Entertainment."

Sony had given theatres in the US and Canada the option to bow out of showing The Interview in the wake of the threats.


Sony had given theater chains throughout North America the option to pull out of showing The Interview. Once major chains like Regal Cinemas [NYSE- RGC], Cinemark [NYSE- CNK] and AMC Cinemas [NYSE- AMC] opted out of distributing the film that reportedly had a cascading effect on other distributors.

The comedy stars Seth Rogen and James Franco as two bumbling Hollywood insiders who manage to land an interview with North Korean leader Kim Jong Un and are recruited by the CIA to assassinate him.

The move by Sony to pull The Interview from its scheduled Christmas day release as condemned by many in Hollywood, Washington DC and on social media, with actor Rob Lowe [who has a cameo in the film, according to the IMDB- NANESB!] tweeting that Sony's decision "would've made Neville Chamberlain proud". Comedian Steve Carell simply tweeted a clip from Charlie Chaplin's 1940 satire The Great Dictator in which Chaplin was mimickinng Nazi leader Adolf Hitler's speeches and mannerisms.

Shortly after Sony announced the cancellation of The Interview, some theaters announced that they would be airing the 2004 comedy Team America: World Police which mocked Kim Jong Un's father and then North Korean-leader Kim Jong Il. However, Paramount Pictures has told theaters not to air the movie.
Posted by Fenway_Nation at 11:31 PM