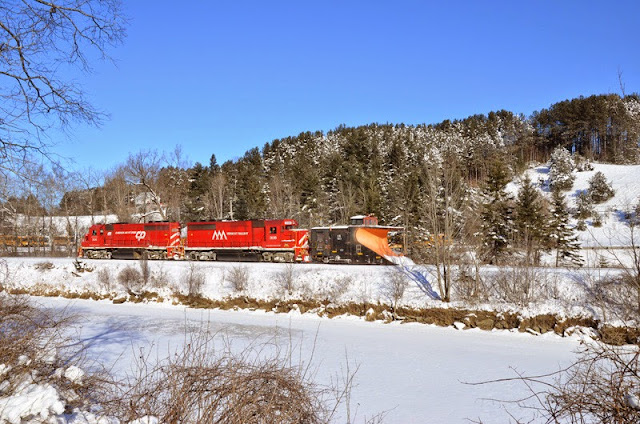 With the world seeming as though it's spiraling out of control with each passing day, it certainly is nice to be able to unwind among friends and loved ones around the Holidays where our concerns may be no more grave than getting black olives on the wrong half of the pizza you ordered for everyone or questioning whether or not a gift card could be considered tacky and impersonal.

This Christmas-card worthy scene that you see here takes place in Caledonia County, Vermont, which is a little ways away from Washington County. Yet despite not going through Washington County [which is where Vermont's capital of Montpelier is located- NANESB!], this line is named after Washington County.

Once upon a time, the Washington County Railroad served the quarries and Bombardier plant around Montpelier, VT. In the 1990s, the railway suffered a catastrophic enginehouse fire, destroying their only two locomotives. After operating under a few different interim operators, the Vermont Railway ended up acquiring the WACR in 1999. By 2003, the Iron Road Railways- which had acquired the Bangor & Aroostook, the former Canadian Pacific mainline between Brownville Jct, ME and St Jean Quebec and the former B&M line from Newport, VT to White River Jct- filed for bankruptcy. Most of the original Bangor & Aroostook as well as the newer Canadian-Atlantic railway linking northern Maine to Montreal was reorganized under the Montreal, Maine & Atlantic [which was in turn re-established as the Central Maine & Quebec after the disastrous 2013 Lac Megantic train wreck and explosion bankrupted the MM&A- NANESB!]. However, the Newport to White River Jct line was acquired by the state of Vermont and almost immediately subcontracted to the Vermont Railway [similar to what the Green Mountain state did in response to the Rutland Railroad's 1963 bankruptcy- NANESB!]. The line was operated under the Washington County- or WACR- banner with the original Washington County trackage around Montpelier being referred to as the Granite District and the 100+ mile line threading its way through northeastern Vermont being referred to as the Connecticut River Division.

As you can probably gather from this image, the WACR is in fact affiliated with the Vermont Railway system. In this winter vignette shown above, the crew of this Washington County Railroad plow train appears to have not that much in the way of accumulated snowfall to worry about. NERail photos contributor Richard Deuso caught Vermont Railway GP40-2 #308 leading a Clarendon & Pittsford GP38 through Lyndonville, VT on January 3rd, 2013 with a VTR snowplow on point. Interestingly, the 308 didn't venture too far from its original haunt, since it started out life as Boston & Maine #303 in 1977.

It doesn't look like there's a lot of snow to clear on this bright winter day, so it's possible it's en route to being repositioned elsewhere for future use.
Posted by Fenway_Nation at 10:59 AM