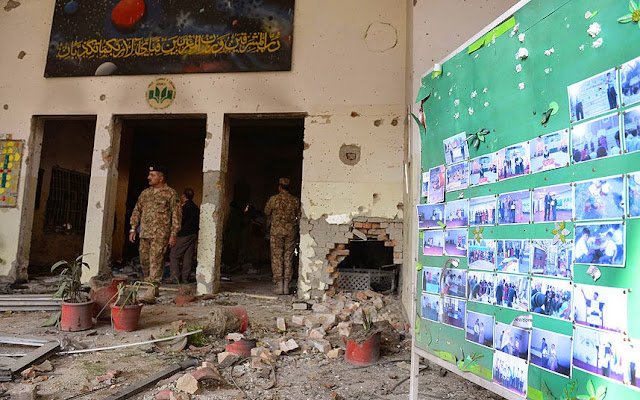 Taliban gunmen and suicide bombers attacked an Army-run school in the Pakistani city of Peshewar on Tuesday, killing at least 132 students and 9 members of the school's staff. With gravely injured students being treated in nearby hospitals for burns as well as bullet and shrapnel wounds, the death toll may go even higher over the next few days.

Pupils as young as nine were shot in their classrooms, or picked off as they ran for cover or begged for help. Others died when the bombers detonated their suicide vests in the playground which was packed with youngsters.

"They dragged the students from classrooms and shot them with automatic rifles," Kashif Ali, 13, one of the injured pupils, said.

Muhammad Shakoor, another injured 13-year-old, said: "The militants pulled the students from beneath the desks and tables and killed them."

A spokesman for the Taliban said it had targeted the school, which served children of the military, in retaliation for the killing of jihadist fighters by the Pakistan army.

As Pakistani troops moved in to secure the grounds of the school, horrific accounts from eyewitnesses and survivors began trickling out. In a classroom with about 60 pupils, a Taliban suicide bomber entered and blew himself up. Others tell of a teacher being burned alive by Taliban gunmen as they forced the students to watch.

According to survivors, many students were gathered for a First Aid class that was to be given by Pakistani Army medics. There were at least six attackers and they reportedly went from room to room, shooting students as they hid under desks or behind bleachers. The attackers also seemed to know that the wives of some high-ranking Pakistani Army officers were present, bolstering claims that the assailants had inside information about the school.

The attacks come about a week after the Obama Administration released the Tehrek-i-Talibani's second in command after he was captured by US forces in Afghanistan during a 2013 raid. The timing of the massacre also came shortly after Pakistani schoolgirl Malala Yousefzai was awarded the Nobel Peace Prize for continuing to speak out in favor of women's education after she was shot in the head by Taliban gunmen in her native Swat Valley in 2012. At age 17, Yousefzai is the youngest recipient of the Nobel Prize and her family condemned the Peshawar school attacks in statements to the media.
Posted by Fenway_Nation at 11:35 PM