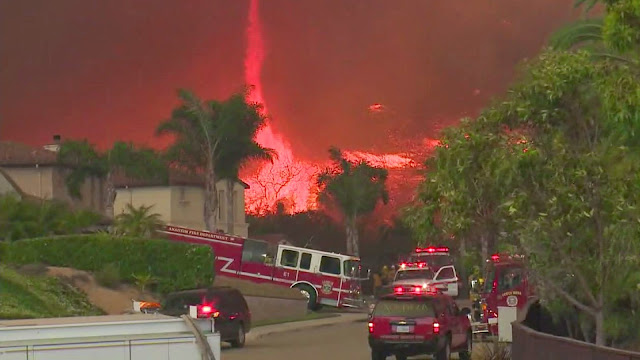 At least nine separate wildfires throughout northern San Diego county have forced thousands of residents in the cities of Carlsbad, Escondido, San Marcos and Fallbrook, CA as well as the 4S Ranch section of San Diego and the nearby Camp Pendleton Marine Corps base to flee their homes as firefighters battled the approaching blaze.

Most of the fires were sparked on Thursday and spread quickly due to dry vegetation, unseasonably warm weather and 50 MPH Santa Ana winds blowing in from the desert. Although firefighters have been going after the wildfires with a sustained air and ground attack, the Poinsettia fire in Carlsbad has destroyed at least 30 homes while the San Marcos fire was large enough to spawn its own weather system as it moved southeast to the neighboring city of Escondido.

Authorities have not ruled out arson and arrests have been made in Escondido and Oceanside, CA of individuals who were seen staring small brushfires in a dry riverbed and city parks. A 57 year old man in Oceanside was arrested after witnesses saw him fanning flames of a fire in the San Luis Rey riverbed while two teenagers were arrested in Escondido on Thursday after multiple witnesses saw them trying to start brush fires in a city park and by a street adjacent to a shopping mall. In Escondido, the fires were quickly doused by nearby homeowners and investigators believe the two teenagers- identified as 19 year old Isiah Silva and a 17 year old accomplice- were copycats who played no role in the larger fires in San Marcos, Carlsbad and Camp Pendleton.

The Poinsettia fire in Carlsbad has already caused one fatality- on Thursday night, firefighters checking an already-burned area for hot spots discovered the charred remains of a man in what was believed to be a transient camp in Carlsbad. A local TV station also broadcast amateur video of what they believe to be the ignition point for the Carlsbad blaze- a golf course along Poinsettia Lane.

Authorities were able to get the San Marcos fire 10% contained on Thursday night and evacuation orders were lifted for parts of San Marcos and Fallbrook overnight- although police set up a checkpoint and would only allow local residents with ID into some of the affected areas.

Meanwhile, military and civilian crews were battling to contain a 14,500 acre wildfire on USMC Camp Pendleton on Friday- although the Marine Corps base is generally wide open, evacuation orders were given to for some housing areas and the town of Fallbrook at the eastern end of Camp Pendleton.
Posted by Fenway_Nation at 11:53 PM