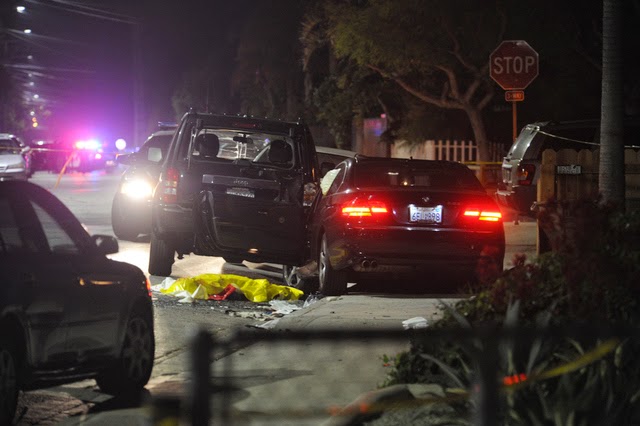 At least six people were killed after the 22 year old son of a Hollywood assistant director fatally stabbed his roommates before getting in his BMW and shooting at pedestrians and into storefronts in the early morning hours on Saturday. Santa Barbra Police responded and exchanged gunfire- during the pursuit, the gunman's Beemer reportedly hit a bicyclist before crashing into a parked car. The killer- who was identified later that day as Elliot Rodgers- then turned the gun on himself shortly after crashing the car.

Officials in Santa Barbara say that the death toll on Friday was six- three stabbed by Rodgers and three shot during his rampage- with 13 injured by gunfire or getting mowed down by Rodger's speeding car.

Elliot Rodgers, the son of The Hunger Games assistant director Peter Rodgers, left behind an online video and lengthy manifesto in which he railed against women- particularly blondes which he claimed he was entitled to date. Two of the victims were identified as women who attended University of California Santa Barbara- 22 year old Katherine Cooper and 19 year old Veronika Weiss. Even before the online videos and manifestos were known, angry loner Rodgers engaged in belligerent and erratic behavior at off-campus parties, including trying to shove partygoers off a ledge and throwing a cup of coffee on a couple outside a coffee shop. The spoiled, misogynist loner was reportedly rewarded with a broken ankle for his trouble and lost his Gucci sunglasses after one altercation at an off-campus party. According to his own writings, spoiled misogynist loner then stumbled around banging on the door of another house demanding they give him back his sunglasses- only to start a fight with the occupants of that house.

Despite California having some of the strictest gun laws in the USA, Rodgers legally obtained his firearms after passing a background check. At the urging of some of his relatives, police in Santa Barbara conducted a welfare check on Rodgers at the end of April but found nothing out of the ordinary. In one of his videos, the killer claimed he nearly panicked that authorities would discover his planned rampage and convinced the deputies on his doorstep that it was all a misunderstanding. Elliot then reportedly mailed his manifesto to his family and therapists just hours before he started his rampage.