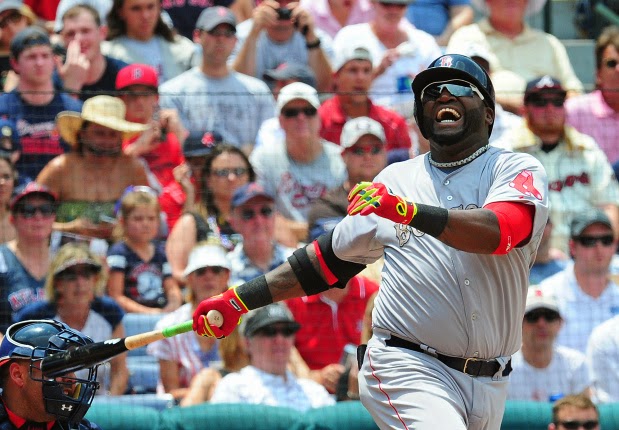 RED SOX- To say it's been an inauspicious month of May for the defending World Series champions would be understating things considerably.

The Red Sox came into Monday afternoon's game poised to match a dubious record among defending World Series champions. Having not won a game since the May 14th game at Target Field against the Twins, Boston came into this week's interleague series against their (former) cross-town rival Braves after being swept by the Tigers and Blue Jays at home last week and the Rays down in Tropicana Field over the weekend.

Early in Monday's game at Atlanta's Turner Field, it looked as though that record would be tied. Despite Boston jumping out to an early 1-0 lead thanks to a Jackie Bradley Jr sac fly in the top of the 3rd, Atlanta would get their first lead of the day by way of a Justin Upton 2-RBI single after Boston starter walked Jason Heyward and Freddie Freeman. With two gone in the bottom of the 3rd Gerald Laird hit a ground ball that hit Buchholz in the feet and changed direction, with Justin Upton coming home to score and make it a 3-1 game.

In the bottom of the 4th, Jason Heyward led off with a walk and went from first to third on a BJ Upton double to deep left. Buchholz would then walk Freeman and get yanked by Farrell with Burke Badenhop coming out of the pen. Two of the runners Badenhop inherited from Buchholz came home on base hits by Andrelton Simmons and Justin Upton, giving Atlanta a 6-1 lead an putting Boston well on its way to a record-tying 11th straight loss- or so it seemed.

In the top of the 5th, starter Ervin Santana led off the inning by getting Grady Sizemore to ground out and JBJ to strike out. With two away, Daniel Nava came on to pinch hit for Badenhop. Nava then moved to 3rd on a Brock Holt double before Santana walked Bogaerts to load up the bases. Santana then got ahead of Pedroia with two strikes and no balls. Just one strike or groundout away from ending the Red Sox rally, Pedroia got under Santana's 0-2 offering and rifled it into center field where bounced before Upton, bringing Nava and Holt home to cut the Braves lead in half.

Even worse for Santana was the fact that he had to face Big Papi with runners on base. With storm clouds moving in, Big Papi made Santana pay by taking his 91st pitch of the game and depositing it in the seats in center left field.

The crowd erupted as Big Papi's blast tied the game [Honestly, I'm not surprised that Red Sox Nation was at Turner Field- I'm just a little shocked at the numbers- NANESB!] and none too soon. With the game tied at 6-6, the game entered a rain delay of more than an hour in the bottom of the 6th.

After the delay, Mujica came out of the bullpen in relief of Capuano and led off by walking Justin Upton- however, that threat was ended when Chris Johnson hit into a double play and Andrelton Simmons grounded out to first to end the Atlanta half of the frame.

In the top of the 7th, Ian Thomas came out of the Braves pen and got Ryan Lavarnway to ground out, but Brock Holt singled, followed by walks to Bogaerts and Pedroia...once again bringing Big Papi to the plate with runners in scoring position. Ortiz got a hold of one, but not enough for it to leave the park. Instead, the Red Sox re-took the lead as Holt came home on the Big Papi sac fly to make it 7-6 Boston. AJ Pierzynski's bat didn't die in vain as he hit a broken-bat RBI single to bring home Bogaerts.

Tazawa, Miller and Uehara would come out of the bullpen and successfully kept the Braves off the board. Despite Buchholz giving up a career worst 8 walks and getting pulled early, the Red Sox go on to win by an 8-6 final and avoid the dubious distinction of being the third-ever defending World Series champions to lose 11 straight games. Mujica was credited with the win while Ian Thomas was hung with the loss.

Game two of the Atlanta portion of the series gets underway at 7:05 ET tonight and will be televised on ESPN. Jon Lester [4-6; 3.36 ERA] will go up against Atlanta's Aaron Harang [4-4; 3.32 ERA] as the Red Sox look to build their win streak to two.

OTHER RED SOX NEWS- The Red Sox and free agent shortstop Steven Drew agreed to a 1-year $10 million contract last week. Drew- the younger brother of former Dodgers, Cardinals and Red Sox outfielder JD Drew- hasn't seen any MLB playing time since the 2013 World Series. In the offseason, the Red Sox offered Drew $14 million, but the shortstop declined and put himself on the market as a free agent. However, through Spring Training and beyond, there were no takers.

The agreement comes as Drew's teammates from the defending World Series champion Red Sox have been going on the DL on after another. Shortly before the signing, 3B Will Middlebrooks went on the 15 day DL with a fractured right finger. Barely two days after the Drew signing was announced, Victorino went on the DL with a strained hamstring while 1B Mike Napoli had issues with his left ring finger.

Shortly after signing the abridged deal with the Red Sox, Drew was sent down to Boston's single-A South Atlantic League affiliate, the Greenville Drive. In his two game stint with Greenville, Drew went 2 for 5 with a run scored and no RBIs. Drew is expected to play for Pawtucket next and the earliest possible return for Drew to the majors is June 2nd.
Posted by Fenway_Nation at 11:55 AM