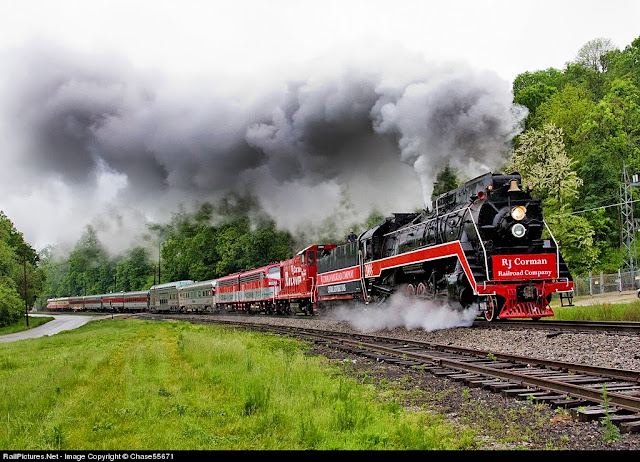 Today's train of thought takes us to the Bluegrass State in the leadup to the Kentucky Derby- despite the very visible presence of a steam locomotive, this shot was taken in the not too distant past.

Besides the mint juleps and Southern belles in big hats, the Kentucky Derby also brings out special excursions for the railroads that serve Louisville. CSX, Norfolk Southern, Canadian Pacific, RJ Corman Lines and Amtrak have all operated special trains for the sole purpose of shuttling VIPS to Churchill Downs [CP sold their former Milwaukee Road line to Louisville, KY to the Indiana Railroad a few years ago, and Amtrak stopped service to Kentucky's largest city in 2003, but Amtrak power still hauls a charter train from Chicago to Louisville for the Derby- NANESB!].

Here, railpictures.net contributor Chase Gunnoe caught RJ Corman's 2010 Kentucky Derby special steaming through West Frankfort, KY under rainy skies with a rather distinct lashup on May 1, 2010. Leading the charge is Chinese-made QJ 2-10-2 steam locomotive #2008, followed by one of RJ Corman's Railpower GenSet demonstrators and a pair of F units from My Old Kentucky Dinner Train on Corman's Bardstown line. The big Chinese QJ, which the late RJ Corman had imported from China and fired up for service on the old Louisville & Nashville 'Old Road' Line in 2008 goes by the moniker "Big Smokey"- somewhat ironic considering that the QJ is actually newer than the F-units behind it.

Corman's QJ has another 15 or so miles to go before uncoupling from the rest of the train in a siding at Christiansburg, KY. Ever since the 1990s, CSX has prohibited the operation of steam locomotives on their rails, and RJ Corman's line in Kentucky exercises trackage rights on CSX around Louisville, meaning the F units will take the passenger consist the rest of the way.

Despite the rainy and overcast weather, the Kentucky Derby went off that day and Thoroughbred Super Saver was the Derby winner.
Posted by Fenway_Nation at 11:06 PM