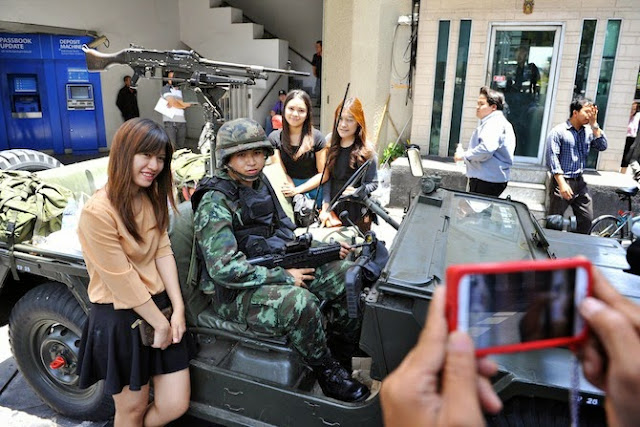 The commander of Thailand's military has ousted Thailand's civilian government in Bangkok in the midst or months-long demonstrations between 'redshirt' supporters of the caretaker government of Prime Minister Yingluck Shinawatra and antigovernment factions. In a televised statement, Thai Army chief General Prayuth Chan-ocha said he had taken power because of a months-long impasse between the government and opposition demonstrators and also due to "the violence in Bangkok and many parts of the country that resulted in loss of innocent lives and property, [which] was likely to escalate""

The military also announced that the 2007 Constitution would be suspended, except for the chapter pertaining to the Thai monarchy. General Chan-ocha is described as pro-monarchy and served in the Queen's Guards Regiment and was involved in a 2006 coup that toppled the government of then PM Thaksin Shinawatra, who is the brother of the Yingluck Shinawatra.

With the coup announcement, the Thai Army also announced that they are imposing martial law and a nationwide 10 PM to 5 AM Curfew. In Bangkok, the Army took PM Shinawatra and her cabinet into custody and moved to disperse pro-government 'redshirt' encampments as well as antigovernment demonstrations.

In late 2013, PM Shinawatra dissolved the House of Representatives and called for general elections on Feb 2nd. However, the elections could not take place that day due to widespread protests. Thailand's Constitutional Court then revoked the elections in March and earlier this month had unanimously voted to remove Yingluck and some of her ministers from office.

Yingluck Shinawatra's Pheu Thai party won more than half the seats for the House of Representatives of Thailand in 2011, making her Thailand's first female prime minister and also its youngest at age 43. Both Yingluck and Thaksin enjoyed heavy support from the predominantly rural north, although wealthy and middle class Thais from around the capital often dismiss them and their Pheu Thai colleagues as backwards and corrupt.

The Thai Army has staged at least a dozen coups since the end of absolute monarchy in 1932.
Posted by Fenway_Nation at 11:42 PM