The Best College Football Conference You're Not Watching? 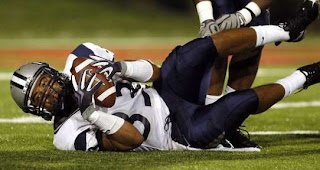 While not nearly as dramatic as Appalachian State's victory over then-ranked #5 Michigan some two years ago, there seems to be something brewing in NCAA's Division 1-AA (currently referred to as the FCS or Football Championship Subdivision). It seems that right out of the gate, a few Division 1-AA teams notched up wins against Division 1/FBS opponents:

The common thread seems to be that Willian & Mary, Richmond and New Hampshire all hail from the Colonial Athletic Association (formerly the Atlantic 10 Conference). In fact, one of the aforementioned teams had a nationally televised game this weekend....well, as 'national' as one can get with Versus.

I know- these are unranked, mediocre opponents in the ACC or MAC that they went up against. But- at least until that Appalachian State/Michigan game- the standard operating procedure seemed to have been for the 1-AA team (no matter how good) to roll over and play dead to the Div. 1 team (no matter how mediocre). Or make it close, but still lose in the end. It's also worth noting that Maine, Hofstra, James Madison, Massachusetts, Northeastern and Rhode Island have already lost their Div. 1 matchups, although some games were closer than others.

Having said that, there aren't too many games left in the CAA where they're matched up against a Div. 1 opponent. In fact, it appears as though it's mostly intra-conference games for Richmond, William & Mary and New Hampshire. Looks like Delaware is matched up with Navy on November 14th, and that's about it before the top 16 teams in 1-AA play for the championship. With that in mind, I'm sure the CAA will be well represented.

UPDATE: Some dilligent research by yours truly has revealed that the Central Arkansas Bears of the Southland conference defeated the Western Kentucky Hilltoppers of the Div. 1 Sunbelt conference 28-7 in week 2 (although the Hilltoppers only recently made the transition from 1-AA to Div. 1 themselves). So while I overlooked that, my statement about the CAA stands.
Posted by Fenway_Nation at 8:37 PM