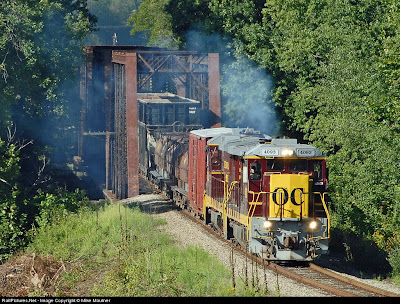 Today's Train of Thought features one odder creations to have come from General Electric's Erie, PA factory in the last 20 years- the experimental 'Super 7' series. The Super 7s were basically heavily rebuilt 'Universal' series locomotives that were traded into General Electric for newer Dash 8 locomotives. Instead of scrapping them completely, GE decided to keep the frames and trucks and give the vintage trade-ins new motors and carbodies. It was only marginally successful- with the Monongahela Railway being the only domestic customer for an order of what was essentially eleven heavily rebuilt ex-Western Pacific U23Bs [U= Universal; 23 = 2300 HP; B = 4-axle wheel arrangement]. However, the Super 7 series generated some interest south of the border, as Mexico's Ferrocarriles Nacionales Mexico (the then state-run railroad) ordered close to 100 to be rebuilt from their retired U36Cs as well as some former Delaware & Hudson and Southern U33Cs and Milwaukee Road and Union Pacific U30Cs. This fleet survived the subsequent privatization of Mexico's railroads and was included in the fleet of TFM (Transportes Ferroviaria Mexicana- now Kansas City Southern de Mexico) and can still be seen operating anywhere between Veracruz and Chicago. Some of the Super 7 demonstrators found their way north to a new home on Quebec ore-hauler Roberval & Saguenay, as well.

Within a few years of ordering the Super 7s, the Monongahela was taken over by Conrail. Conrail, in turn, was split between CSX and Norfolk Southern in 1999. The Super 7s dutifully served Conrail and CSX before the latter decided to sell off the oddities. Takers for the 11-unit fleet included the Providence & Worcester, Ohi-Rail, the New Castle Industrial Railroad, Arkansas & Oklahoma and Ohio Central. On a bright August 2008 day, railpictures.net contributor Mike Mautner caught OHCR B23-S7 #4093 and a sister Super 7 heading up the Coshocton-Zanesville, OH 'Steel train' across the Tuscawaras River bridge in West Lafayette, OH.

Since this photo was taken, shortline operator Genesee & Wyoming announced their acquisition of the Ohio Central railroad. So it's entirely possible that besides wearing the paint of Ohio Central, CSX, Conrail and the Monongehela, the 4093 might also be wearing G&W's trademark orange in due time.
Posted by Fenway_Nation at 10:18 PM