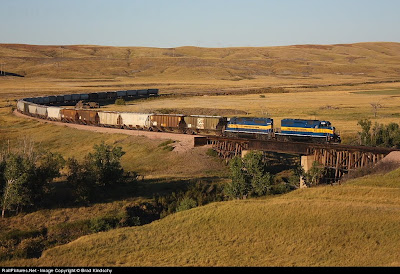 Almost a year ago to the day, the Canadian Pacific railway acquired the 2500+ mile Dakota Minnesota & Eastern Railway as well as its sister company Iowa Chicago & Eastern. This increased the CPR's presence in the Midwestern USA considerably (having purchased the Soo line some 20 years earlier) and put it right at the cusp of Wyoming's Powder River Coal Basin- a lucrative traffic source for Union Pacific and BNSF to this day.

The Iowa Chicago & Eastern, previously operated by Montana Rail Link's Washington Group as I&MRL connected Minneapolis-St. Paul with Chicago and Kansas City by way of the Quad Cities. Ironically, Soo Line acquired these lines with their purchase of the Milwaukee Road in the 1980s,
but Soo Line's parent company- Canadian Pacific- decided to spin off the Twin-Cities-Chicago and Twin Cities-KC trackage to the Washington Group.

As for the DM&E- it never quite reached the Powder River Basin; should it choose to reach the lucrative Wyoming coalfields, that will be up to Canadian Pacific now. For the most part, its bread and butter [no pun intended] was the wheat, grain, soybeans and other agricultural goods it hauled across former Chicago & North Western lines in Minnesota, South Dakota and parts of Nebraska and Wyoming. Appropriately enough, railpictures.net contributor Bran Kindschy caught SD40-2 #6217 of sister railroad Iowa Chicago & Eastern leading southbound DM&E freight HURC (HUron, SD to Rapid City, SD) over Lance Creek at Wendte, SD just before twilight on September 15, 2008- a little over a month before the CPR took over the regional. With frequent 10 MPH speed restrictions, it takes nearly a whole day for the train to travel the 170 miles between the two towns.
Posted by Fenway_Nation at 9:44 PM