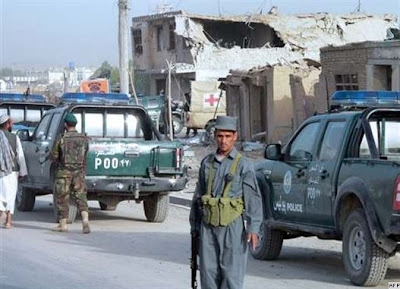 Taliban militants managed to spring at least 480 inmates from a Kandahar prison Sunday night after digging a 1,000 foot tunnel from a residence within sight of the prison's guard towers.

Officials at Saraposa prison in the city of Kandahar only discovered the breach about 4 a.m., about a half hour after the Taliban said they had gotten all the prisoners out.

The militants began digging the tunnel about five months ago from a house within shooting distance of the prison guard towers. It was not immediately clear whether they lived in the house while they dug. They meticulously plotted the tunnel's course around police checkpoints and major roads, the insurgent group said in a brazen statement.

The diggers finally broke through to the prison cells around 11 p.m. Sunday night, and a handful of inmates who knew of the plan unlocked cells and ushered hundreds of inmates to freedom without a shot being fired.

The city's police mounted a massive search operation for the escaped convicts. They shot dead two inmates who tried to evade capture and re-arrested another 26, said Tooryalai Wesa, the provincial governor.

But there was no ignoring that the Taliban had pulled off a daring success under the noses of Afghan and NATO officials.

A man who claimed to have taken part in the jailbreak told the Associated Press via telephone that inmates were able to obtain copies of keys to some of the inmate's cells ahead of their cohorts outside tunneling through and inferred that there was complicity on the part of some of the prison guards.

Exit question for those of you in favor of closing down Guantanamo Bay- still think it's a good idea for a civilian trial for Khalid Sheikh Mohammed while transferring inmates from Guantanamo to prisons in the continental United States?