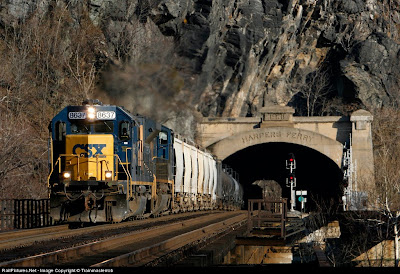 With the 150th anniversary of the Civil War taking place this month, today's train of thought takes us to one of the most pivotal towns throughout the whole conflict- Harper's Ferry, WV.

Located at the confluence of the Potomac and Shenandoah Rivers, by the mid 19th century the town was home to a US Military Armory and was linked to the rest of the country by the Chesapeake & Ohio Canal and the Baltimore & Ohio Railroad. In 1859, the Armory was targeted by abolitionist John Brown and 21 men (mostly escaped or freed slaves) in a nighttime raid that killed 11. Brown and most of his surviving men were captured and the fiery abolitionist was sentenced to hang in December 1859. As much as the first shots fired at Ft Sumter marked the official start of the Civil War, Brown's uprising in what was then a Virginia town and execution was thought to be the catalyst for the conflict.

The town of Harper's Ferry itself changed hands no less than 8 times during the Civil War, with retreating Union forces destroying the Armory to prevent it from falling into Confederate hands. The Union then annexed the two counties that make up the eastern panhandle of West Virginia from Virginia (West Virgina was the only state to secede from the Confederacy) in 1863. With the railroads and canals, Harper's Ferry was a sought after prize for Robert E. Lee who could not resupply his Army on their way to Gettysburg.

After the war, the B&O line remained, with the line through Harper's Ferry hosting trains between Baltimore and Washington D.C. to the east and Pittsburgh, Cincinnati, Chicago, St Louis and the coal fields of West Virginia to the west. In the 1970s, the line was merged into the Chessie System and in the late 1980s, the line became part of the CSX system. The Harper's Ferry Train station is still open and hosts both east and westbound versions of Amtrak's Washington D.C.-Chicago Capitol Limited but is also the westernmost station stop for the MARC commuter rail.

Here, railpictures.net contributor trainmasterrob caught CSX SD50 #8637 leading Cumberland, MD-bound general freight Q414 crossing the Potomac and heading into Harper's Ferry from Maryland Heights on the last day of 2007. The portal of the tunnel is on the Maryland side of the river and was part of a realignment dating back to 1931, which is fairly recent given the West Virginia town's eventful past.
Posted by Fenway_Nation at 11:59 PM