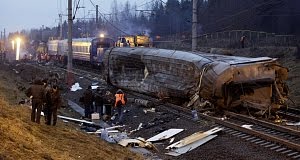 RUSSIA- Investigators from Russia's FSB and Transportation Police are looking for four suspects thought to be involved in the terrorist attack on the Moscow-St. Petersburg Nevsky Express on November 27, 2009. The blast and resulting derailment killed 27 passengers and used the equivalent of 15 lbs of TNT. A smaller bomb near the derailment site was detonated the following day, targeting rescuers and investigators. There were no fatalities in the second blast and security services believe that both bombs were detonated by remote. The suspects are thought to have rented a house in the nearby village of Lycoshino to monitor train movement on the Moscow-St. Petersburg Line.


This is not the first time the Moscow-St. Petersburg train has been the target of terrorists or saboteurs. Two men previously held on terrorism charges by authorities were found guilty of lesser charges of trafficking explosives and unrelated counts of armed robbery this week that carried 4 and 10 year prison sentences last week in connection with the August 2007 bombing of the Nevsky Express. The blast derailed the train just outside the town of Malaya Vishera, but resulted in no fatalities.


IRAN: Eight people were killed and twelve hospitalized when two coaches of a speeding passenger train derailed at the Azadvar Station in Joqati, in the northeastern part of the country some 430 miles east of Tehran. The Islamic Republic of Iran has been experiencing problems with it's deteriorating transportation network over the last several years that have resulted in numerous and deadly plane crashes and derailments [YET- they'll somehow get it right with a 'peaceful' nuclear energy program- NANESB!]. 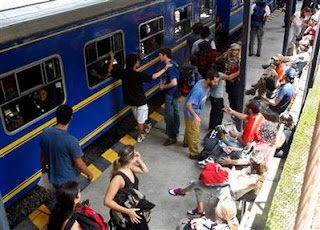 PERU: Heavy rains in southern Peru earlier this week stranded over 2000 tourists in the area around the Incan ruins of Machu Picchu when floods and landslides blocked off the railway line connecting Machu Picchu and the nearby town of Aguas Calientes with the rest of the country. Peruvian military officals evacuated the visitors using seven helicopters flying between the town of Aguas Calientes and Cuzco on a rotating basis. The railway line between Cuzco and Aguas Calientes is said to be obstructed by at least 40 landslides and will require several weeks worth of work in order to reopen. 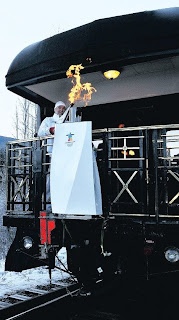 CANADA: Canadian Pacific hosted a ceremony this week featuring the Olympic torch at Craigellachie British Columbia, site of the ceremonial last spike driven on Canada's transcontinental line in 1885. The Canadian Pacific [NYSE: CP] is a corporate sponsor of the 2010 Winter Olympics in Vancouver. The special train continued on to Revelstoke, BC where the torch resumed its journey through the Canadian Rockies. The 2010 Winter Games opening ceremonies are scheduled for Febuary 12, 2010.


USA: The Montreal, Maine & Atlantic has announced the layoff of 75 employees in their 315-employee workforce. The news comes a few months after one of the railroad's largest customers, the Katahdin Paper Mill of Millinocket, ME shut down due to increased fuel costs for the plant's $150 million No. 11 Machine. Currently, the Toronto based paper company is exploring alternative fuels for the No. 11 Machine, but more than 200 workers from the plant are out of work. 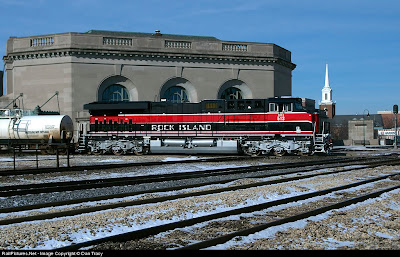 The Iowa Interstate has taken delivery of their two new ES44AC GEVO locomotives this month. What separates these two from the first dozen that IAIS ordered was that these two have been painted in vintage Chicago, Rock Island & Pacific colors.....on locomotives that were made nearly some 30 years after the Rock Island ceased to exist. Appropriately, the Iowa Interstate hauls commodities on the former CRI&P Blue Island, IL-Council Bluffs, IA line. Here, the Rock Island/Iowa Interstate #513 hammers the diamonds at Joliet, IL with a train of ethanol in tow on January 29, 2010. The #513 is using Metra trackage rights and the tracks in the foreground belong to Union Pacific and BNSF. 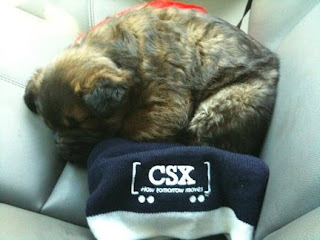 (Gary McLean)
A CSX track inspector in Alabama was in for a surprise when he was inspecting the tracks around the Birmingham, AL area in the wake of last week's cold snap down south. An unfortunate puppy, believed to be 8 weeks old was frozen to the rails after his wet fur froze to the steel rail. Track inspector Gary McLean was able to cut the puppy's fur free from the rails before a freight train was scheduled to traverse the line. McLean had the frozen pup warm up in his hi-rail vehicle while he sent some pictures of the critter to his wife. The couple already had 3 dogs and couldn't keep the puppy Gary found, but Mrs. McLean posted a photo on her facebook page when a local meteorologist got word of the little canine's plight and his tale made its way to the blog of the local ABC affiliate. The e-mails came pouring in and Terry Walls of nearby Bessemer, AL persuaded the McLean's that she could provide the best home for the baby pooch. Appropriately enough, the puppy's name is Track.
[Hat Tip: PiGuy]
Posted by Fenway_Nation at 10:26 PM