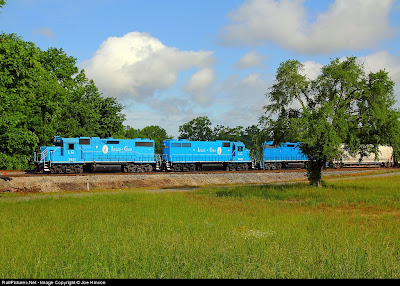 With a name like Lancaster & Chester, you would expect today's Train of Thought to highlight a bucolic shortline running through Pennsylvania Dutch Country. While the countryside the L&C runs through can be described as bucolic the railway actually runs through the northern reaches of the Palmetto State.

The L&C, also known as the Springmaid Line, started up from an 1877 charter to build a 29-mile rail line connecting Chesterfield and Chester counties. Given the inevitable changes that the larger carriers the L&C interchanged with over the last century, operations along the Springmaid Line itself was relatively unchanged until the last decade or so.

However, under the tenure of Elliot White Springs in the 1950s, the shortline embarked on a series of flamboyant and tongue-in-cheek promotions including appointing 29 different Vice Presidents- one for each mile of track. 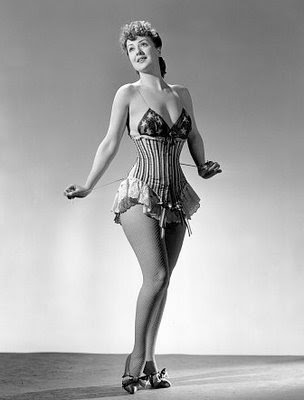 Perhaps the most memorable was when striptease artist and burlesque entertainer Gypsy Rose Lee (above) was named Lancaster & Chester's 'Vice President of Unveiling'. The railroad also offered a fictitious menu for a number of entrees served on their nonexistent passenger trains, including items like 'Split Dixiecrats with Frozen Assets' or 'Back Bay Trollops with Harvard Accent'- despite the fact that the L&C didn't even own a dining car.

Over the years, traffic has consisted of coal, textile products, aggregates, fertilizer, wood products, sand and fiberglass, with a stable of powder-blue EMD end cab switchers doing most of the heavy lifting throughout much of the L&C's diesel era.

In the late 1990s, JP Henderson Inc set up shop on L&C property and began extensively refurbishing and restoring passenger cars. In 2001, the L&C entered into a lease agreement with the Norfolk Southern to begin operating additional trackage in Lancaster County between Catawba Jct and Kershaw. The expansion meant additional motive power for the L&C- first a pair of SW1200s followed by a pair of SW1500s.

However, in addition to borrowing some LLPX loaners the L&C made their first ever purchase of EMD roadswitchers with the purchase of a couple of ex Norfolk Southern (nee Conrail) GP38-2s that were eventually painted in Lancaster & Chester's powder blue scheme and lettered for the Springmaid Line.

In late 2010, the it was announced that Tenessee-based Gulf & Ohio railways would acquire the L&C. The Gulf & Ohio operates the Yadkin Valley and Laurinburg Southern just up the road in North Carolina. In June of this year, the G&O began sending motive power to the L&C starting with a former Kansas City Southern GP38-3. Apparently the plan is to replace the LLPX locomotives with power from other G&O operations as their leases expire.

Bringing us to the very top of the page, railpictures.net contributor Joe Hinson caught a trio of L&C GP38s working the Norfolk Southern interchange at Chester, SC in May 2011. The third unit in the consist is apparently one of the LLPX loaners still on property, although it's difficult to say if it was obscured by design on the photographer's part.
Posted by Fenway_Nation at 11:49 PM