Sports Chowdah Update- Are You Ready For Some Football? So Is the NFL; Ain't it Grand? Lucky #1000 For Papi, Francona 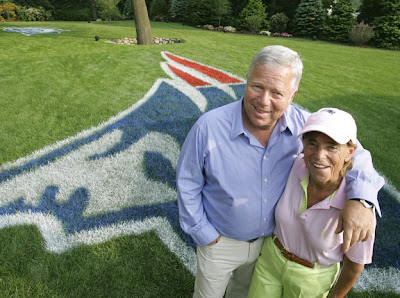 The daughter of Lithuanian immigrants who settled in Worcester in the 1930s, Myra Kraft was active in the United Way of Massachusetts Bay, Combined Jewish Philanthropies of Greater Boston and Boys & Girls Club of Boston and managed the New England Patriots Charitable Foundation and Kraft Family Foundation. For the past two years, Myra had served as chair of the board of directors for the United Way of Massachusetts Bay and Merrimack Valley.

In leiu of flowers, the Kraft family has asked that donations be made to the Myra & Robert Kraft Giving Back scholarship fund for the Boys & Girls Club of Boston.

NFL: Almost as an afterthought, the NFL lockout has come to an end. The final major obstacle appeared to be the implementation of a wage system for rookie players, which was cleared last week and approved by the NFL player's association.

Since then, this has set off a flurry of trades, free agent signings and transactions that had been building for months, since free agents couldn't be signed while the lockout was still in effect.

The New England Patriots acquired Defensive Tackle Albert Haynesworth from the Washington Redskins in exchange for a 5th round pick in the 2013 draft. The Redskins signed Haynesworth to a big money contract in 2008 that included a then-NFL record $41 million in guaranteed money.

The Pats also signed flamboyant former Bengals WR Chad Ochocinco to a 3 year deal, although it wasn't immdiately disclosed what the Bengals got in return [aside from peace & quiet- NANESB!]

Other noteworthy transactions in the past couple of days include the Miami Dolphins reportedly finalizing a trade deal that would New Orleans Saints RB Reggie Bush to South Beach. Free agent quarterback Matt Hasselbeck left Seattle after signing a multi-year deal with the Tennessee Titans after they cut Vince Young. 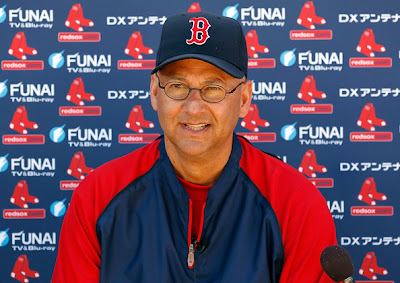 [On a personal note, I sometimes shudder to think where the Red Sox might've ended up without Francona. Not just the 2004 and 2007 World Series, but bouncing back from that atrocious 2-12 start this season- NANESB!]

The Red Sox managed to sweep the Mariners over the weekend before playing host to the Kansas City Royals. During that series, another milestone was reached. 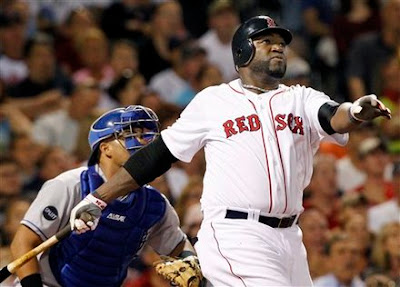 On Wednesday's game against the Royals, David Ortiz scored his 1000th RBI with Boston in memorable fashion as he belted a Bruce Chen offering into the bullpen with the bases loaded in the bottom of the 5th to break the game wide open for Boston. The grand slam ties Papi with SS Rico Petrocelli (1963-1976) for 2nd all time in Red Sox history- Ted Williams has 17 to his name.

Dustin Pedroia also extended a career-best hitting streak to 24 games and John Lackey didn't have to worry about much in the way of run support in Wednesday night's 12-5 win over the Royals.

However, the series was bookended by close losses to Kansas City, with Monday night's 14-inning 3-1 loss and Thursday's 4-3 loss. Josh Beckett Gave up a 3-run homer to KC DH Billy Butler and an RBI double by 3B Mike Moustakas to give KC the 4-2 lead in the top of the 4th during Thursday's day game that would turn out to be the game-winner. Dustin Pedroia made it a 1-run game and kept his hitting streak alive with a solo homer in the bottom of the 8th, but Joakim Soria was able to close out the game for KC in the bottom of the 9th after giving up a 1-out single, preserving the Royal's 4-3 win.

ELSEWHERE IN MLB: Former Yankees and Expos pitcher Hideki Irabu was found dead in his Southern California home on Wednesday afternoon. Irabu was billed as 'Japan's Nolan Ryan' when he signed with the Yankees in 1997. The San Diego Padres had originally purchased his contract from the Chiba Lotte Marines, but he refused to join San Diego, insisting he would only play for the Yankees.

Irabu had been playing in Japan and for Long Beach in the independent Western League after falling well short of the high expectations for him in New York. Between 2008 and 2010, Irabu was also arrested for drunk and disorderly conduct and suspicion of DUI by police in both California and Japan.

ANGELS: After giving up an unearned run on a wild pitch in the bottom of the 1st inning, the Angel's Ervin Santana threw a no-hitter against the Cleveland Indians at Progressive Field on Wednesday afternoon. Santana struck out 10 and walked one (the batter in the 1st inning reached on an error) in nine no-hit innings of work. Santana pitched the 1st complete game no-hitter for the Angels since 1984 behind Mike Witt and their first no-hitter since 1990- 7 no-hit innings from Mark Langston and the final two hitless innings from Mike Witt, again.

The win was Santana's first against the Tribe in 11 starts and the first no-hitter thrown at Jacobs/Progressive Field.

NATIONAL LEAGUE: The San Francisco Giants have acquired Mets outfielder Carlos Beltran for righty prospect Zach Wheeler. Boston, Texas, Atlanta and Philadelphia were among the rumored destinations where Beltran would end up by the trade deadline, but Wednesday's trade ended that speculation.

On Thursday, the Chicago Cubs dealt outfielder Kosuke Fukudome to the Cleveland Indians for minor leaguers Abner Abreu and Carlos Smith. This season, Fukudome had a .279 batting average with three homers and 13 RBI in 87 games with the Cubs.

He was cleared to play after a routine checkup on Monday. Interestingly, Herzlich is one of 14 players to have an NFL Flims camera crew follow him as the league is documenting their transition from pre-draft workout to their first NFL game.
Posted by Fenway_Nation at 1:45 PM