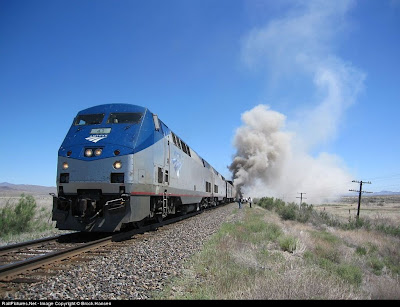 NEVADA: As the death toll from the June 24th collision between a gravel truck and Amtrak's California Zephyr was revised upwards to 6, investigators are focusing their attention on the truck driver, identified as 43 year old Lawrence Reuben Valli of Winnmeucca, NV, and a number of traffic citations and moving violations he accumulated in recent years.

Investigators from the NTSB are also looking into the safety records of John Davis Trucking of Battle Mountain, NV as well as Valli's medical history. The company has has two accidents in the last two years and an January 2011 inspection showed tired so bald on one trailer that it had to be taken off the road. Officials refused to speculate whether or not such a record was typical for a company the size of Davis Trucking (currently with over 100 drivers on its payroll).

The rig in the California Zephyr collision was longer and heavier than the law allowed, but the trucking company was able to obtain a waiver prior to the accident. Investigators also believe that the fireball after the collision was caused by the two sidesaddle tanks, each with a capacity of 110 gallons.

According to a Nevada Highway patrol spokesman, the speed limit on that stretch of highway 95 is 70 MPH and visibility to the crossing was half a mile that day. The gates were also working and should've been activated at least 25 seconds before the train approached the crossing in Churchill County. 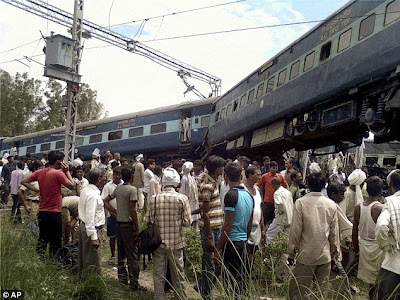 INDIA: The death toll has risen to at least 60 in India and is expected to climb as many more passengers are trapped after a passenger train crashed into a bus carrying a wedding party and derailed in the northern Indian state of Uttar Predesh. Initial reports indicate that the bus with about 80 wedding guests got caught on an unguarded rural crossing when the rear axle broke. Upon colliding with the train, the mangled bus was dragged another 1000 feet before the Kalka Mail was able to come to a stop.

Another 200 people were injured, with some being treated at the scene or in nearby hospitals in clinics.

Railway officials estimate that the express train was travelling 108 Km PH at the time of its impact, close to it's maximum speed limit along the route. 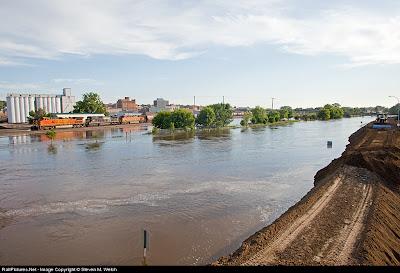 Last BNSF train makes its way through Minot, ND as the Souris River tops the levees on June 23rd

NORTH DAKOTA: Traffic levels for the BNSF mainline through North Dakota began returning this week as record flooding of the Souris River in and around Minot, ND severed both the BNSF's former Northern Pacific's Northern Transon line and Canadian Pacific's former Soo Line track between Portal, ND and the Twin Cities.

An official for the North Dakota National Guard said that an estimated 4000 homes in Minot and Ward county have been damaged by floodwaters that have reached anywhere from 6 to 10 feet. Unofficial estimates say that as many as 800 homes may have to be demolished as the floodwaters recede. 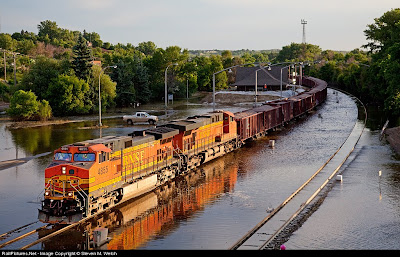 The BNSF line through Minot reopened to work trains on the 4th of July and saw some of the detoured traffic return gradually throughout the week. Amtrak's Empire Builder- operating on BNSF's Northern Tanscon- was suspended between Havre, MT and St Paul, MN. While it's not unusual for BNSF or Canadian Pacific to divert traffic over each other's lines in the event one line is shut down, the two lines intersected at Minot, necessitating even longer detours for the carriers. The BNSF rerouted trains south across its former Milwaukee Road line through South Dakota while Canadian Pacific detoured trains through Manitoba and on south through Glenwood and Thief River Falls, MN for its Chicago to Vancouver traffic while repositioning motive power and Maintenance of Way equipment over the Dakota, Missouri Valley & Western south of Minot. 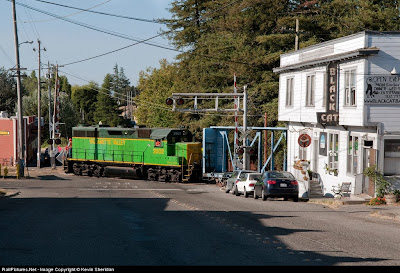 CALIFORNIA: Final preparations are underway for limited freight service to resume on a 62-mile stretch of former Northwestern Pacific trackage in Northern California this month after the line's operator ran a series of test trains on the rebuilt trackage.

In late June, a single NWP Co locomotive and a pair of loaded freight cars traversed the tracks between Napa Jct and Petaluma, CA to gauge the status of different trestles and crossing signals along the line with further test trains scheduled to run to the current end of the operable track at Windsor, CA.

A number of shippers in communities along the dormant line have expressed an interest in shipping by rail once the line is reactivated. Traffic is expected to include grain, feed, aggregates, lumber and wine.

Multiple environmental agencies in the area have threatened to sue the North Coast Rail Authority- the line's owner- if the NWP resumes operations without addressing their concerns, claiming that re-opening the line would endanger the Eel River if the former NWP line between Willits and Eureka, CA reopened [inquiring minds want to know- did the Natural Resources Defense Council put them up to it, or are environmentalists naturally inclined to be insufferable douchewaffles who savor keeping more trucks on already crowded highways and even more people out of work? -NANESB!] 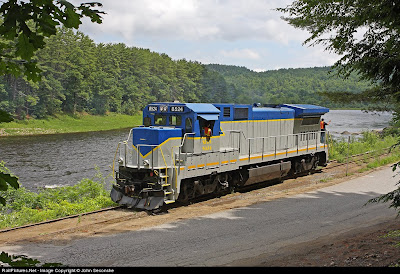 NEW YORK: New York's newest railway is expected to begin operating in a few days as crews familiarized themselves with new motive power along the former Delaware & Hudson North Creek branch between Saratoga Springs and North Creek, NY. Over the winter, Wayne County and the town of Corinth- the line's owners- announced that Chicago-based Iowa Pacific Holdings would be the new operator of the line. The new railroad will operate as the Saratoga & North Creek and power will be a pair of GE B39-8s and a rare EMD BL2 painted in a scheme reminiscent of the D&H 'Lightning Stripe' colors.

Previously, the limited excursion service over the line was operated by the Upper Hudson Railroad. Iowa Pacific presently operates a number of shortline railroads in the western USA- a number of them, such as the Arizona Eastern or San Luis and Rio Grande, also operate excursion trains.

An invitation-only VIP train is scheduled to operate on July 12th while regular excursions will begin on July 14. By re-opening the line to Saratoga Springs, the line is not only able to connect with Amtrak passenger trains, but also the national rail freight network by interchanging with CP Rail's former D&H Montreal-Albany line. Iowa Pacific is hoping to court Barton Mines, LLC as a shipper while the town of Corinth is hoping that a rail connection could attract a potential tenant to the dormant International Paper mill in town. 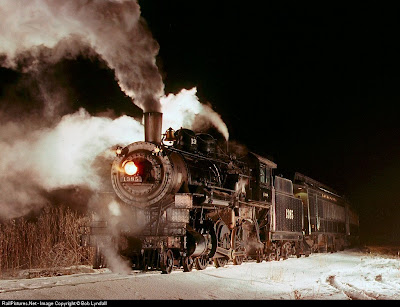 WISCONSIN: For the first time in over a decade, the Mid-Continent Railway Muesum in North Freedom, WI will have trains powered by steam. Diminutive 1930-built Porter 0-4-0 #75, built for Flagg Coal, will be trucked into the museum in August by the family-operated, family-run Gramling Locomotive Works. The Museum plans on operating an extended schedule for August, anticipating additional riders with the arrival of the old Porter.

However, that is not the biggest news for the Mid-Continent Railway Museum, as a local foundation offered a $250,000 challenge grant to go towards the full restoration of the MCRM's last operating steam locomotive- 1907 built Chicago & North Western ALCo 4-6-0 #1385. The old C&NW Ten Wheeler routinely saw service hauling not only the museum's excursions, but also the Baraboo Circus Train based out of the Circus World Museum in Baraboo, WI until the flatcars used to haul the wagons were deemed too old to operate on a common carrier after 2000.

"We have supported the museum over the past few years and have been impressed with their programs, their popularity with young families and their determination to recover from the destruction of 2008's flooding," said Dick Wagner, president of the Wagner Foundation. "We couldn't think of any more important way to support the museum further than to help it get its steam program going again."

When the restoration project begins, it could take as long as 18 months to put the engine back into service. But museum officials hope to get the ball rolling soon, and have named Tom Diehl, president of the Tommy Bartlett Shows and Exploratory World in Wisconsin Dells, honorary chairman of the fundraising campaign to match the grant.

The 1385 has been out of service since 1998- the locomotive was awaiting boiler work when the FRA revised the guidelines for steam boiler operations, nearly tripling the costs of restoring the disassembled steam locomotive.
Posted by Fenway_Nation at 9:57 PM