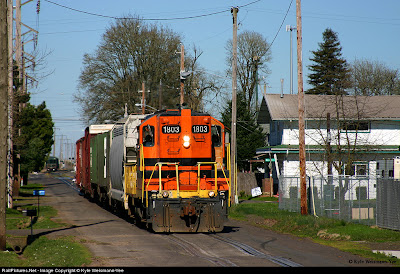 Today's train of thought brings us to the side of the street at a quiet residential neighborhood in Oregon's Willamette Valley.

Genesee and Wyoming's Portland & Western features a cluster of secondary and branch lines of Southern Pacific, Spokane Portland & Seattle, Northern Pacific and Oregon Electric Railway lineage that were systematically acquired in Western Oregon via lease or purchase throughout the 1990s.

The Oregon Electric started out life a little over a century ago as an interurban running between Portland and Salem, OR. Not even three years after it began operations, the OER was purchased by the Spokane, Portland & Seattle and extended further south to Eugene, OR to compete with the parallel Southern Pacific line. Like many of the interurbans that sprouted up throughout the country in the early part of the 20th century, they went into decline shortly after WWII. Although most of the electric equipment was retired, the SP&S continued freight and passenger operations on the line until rail travel was eclipsed by the advent of commercial flights and the opening of interstate 5 parallel to both the Southern Pacific and Oregon Electric lines.

Even though entire interurban and trolley systems were abandoned, torn up and dismantled throughout the country, a surprising amount of the Oregon Electric remains intact. In fact, the 100-mile stretch of track between suburban Portland and Eugene is referred to as the 'Oregon Electric Division' by Portland & Western. In and around Portland itself, the Tri Met's MAX Blue line between Portland and Hillsboro uses what was once OER right of way, the line having gone full circle back to a people-mover.

To the south, the Portland & Western's OE Division still provides the regional with all sorts of online traffic- mostly lumber and paper products. Here, railpictures.net contributor Kyle Weismann-Yee caught Portland & Western GP9 #1803 trundling down 4th St in Harrisburg, OR with a few cars it's picked up after switching local industries on its way back to Eugene in Feb 2006. Towns along the old OE line such as Harrisburg, Junction City, Albany, Hillsboro, Salem and Independence still feature street running trackage. 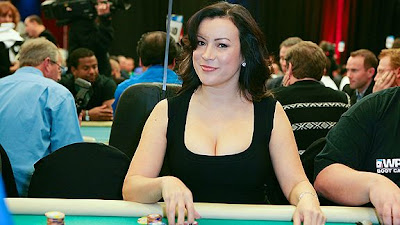 And what would a post featuring 1st generation motive power be without a gratuitous mention and image of actress/poker player Jennifer Tilly? Again, both are products of the 1950s and both are still looking pretty damn good to this day.

The #1803 came over from sister Genesee & Wyoming railroad Louisiana Delta in the late 1990s and was purchased secondhand from the Southern Pacific shortly after the GWRR venture in that state started up. Although bigger power such as SD45s or GP39-2s are the go-to power for Portland & Western's bigger freights, the Portland & Western still roster a number of largely unmodified GP9s and SD9s- a few of them even repainted into Southern Pacific's 1950's vintage 'black widow' paint scheme.
Posted by Fenway_Nation at 11:58 PM