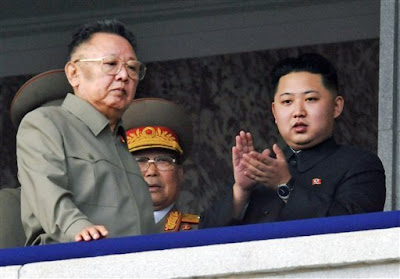 North Korea's State TV is reporting that 69 year old strongman Kim Il Jong passed away over the weekend. The reports indicate he suffered a fatal heart attack while travelling by train on Saturday.

Kim Il Jong assumed power in 1994 after his father, North Korean founding father Kim Il Sung, passed away at the age of 82. Both Kim Il Sung and Kim Il Jong maintained a belligerent and acrimonious relationship with South Korea, the United States and Japan since the 1953 ceasefire in the Korean War. Kim Il Jong continued his father's legacy of isolating the country from the rest of the world and restricting the individual rights of North Koreans, subjecting them to arbitrary imprisonment or execution.

However, these abuses under Kim Il Jong's were compounded by widespread famine and his ambitions to see North Korea a nuclear state. It's thought that anywhere from 200,000 to 800,000 North Koreans perished annually during the famine that struck the country in the late 1990s.

North Korea at night as seen from space, standing in stark contrast to free-market and much more technologically advanced South Korea

While outside observers such as the United Nations and the CIA noted that North Korea became a nuclear power in 2009, the nation's infrastructure is crumbling, media and telecommunications remain strictly under state control and to this day isn't self-sufficient in providing food for its people.

In South Korea, President Lee Myung-Back convened an emergency national security council meeting and the South Korean military was placed on alert as a precaution, increasing border and maritime patrols.

In March 2010, South Korean Navy Corvette Cheonan was torpedoed by a submarine from the North, killing 46 sailors. Then in November 2010, North Korea shelled a populated island off the coast of South Korea.

According to South Korea's spy agency, Kim Il Jong's ailing health prompted him to prepare an heir apparent to assume power that much quicker. It appears likely that Kim Il Jong's youngest son, Kim Jong-Un will assume power after having been promoted to 4-star general in the North Korean military and was awarded senior level posts in the ruling party.
Posted by Fenway_Nation at 8:47 PM