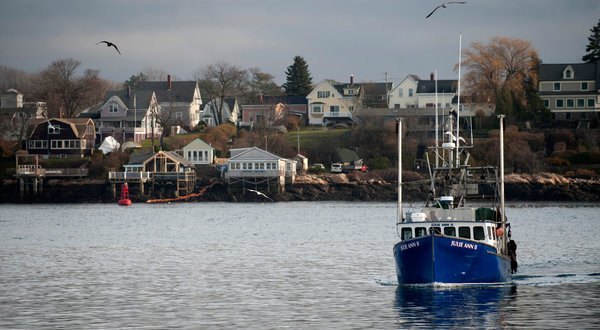 The New England Fishery Management Council this week approved drastic cuts in the catch limit of cod off the coast of New England, adding the the already beleagured industry's woes.

The New England Fishery Management Council on Wednesday approved a year-to-year cut of 77 percent on the Gulf of Maine cod limit and 61 percent for Georges Bank cod.

The cuts come on top of a slew of other reductions, ranging from 10 to 71 percent, on the catch of other bottom-dwelling groundfish species, such as haddock and flounder.

Fishermen say now they're staring at industry collapse because they've been left with far too few fish for most boats to make a living.

"We are headed down the wrong course here, of exterminating the inshore fleet, for no good reason," said David Goethel, a New Hampshire fisherman and council member.

The cuts, in effect May 1, are expected to be backed by federal managers at the National Oceanic and Atmospheric Administration. NOAA's top federal fisheries regulator, John Bullard, acknowledged the reductions will be devastating. But he said the fish stocks are struggling and the industry's steady, excruciating decline must be reversed.

"The first thing we have to do is put denial behind us," he said.

The cuts hit an industry that was crucial to the nation's early economy and remains imbued with the risk and romance of man versus nature -- depicted in the famous "Man at the Wheel" statue in Gloucester of a fisherman facing the sea.

The new low limits reduce the cod catch to just a fraction of what it once was and prevent fishermen from landing more plentiful species, such as haddock and pollock. That's because fishermen can't pull up the healthier groundfish without catching too much of the cod that swim among them.

An economic analysis by the council projected that the cuts would reduce overall groundfish revenues by 33 percent, from about $90 million in 2011 to about $60 million in 2013. But fishermen said the projection is far too optimistic.

"It's fantasy. ... I mean, I'd rather go to Disney World. I've got a better chance of meeting Peter Pan," said Goethel, who predicted the entire New Hamsphire fleet would be eliminated.

Fishermen have consistently disputed the accuracy of the science that drives regulation and that indicates the stocks are in bad shape. And they noted the industry has generally fished at or below levels recommended by science in recent years, but the advice has proven wrong.

"I've done everything they told me to do, and all of the sudden I come up here to a meeting today, and they're going to send me in a coffin out of this place," said New Bedford fisherman Carlos Rafael, who said he may have to sideline half of his fleet of 20 groundfish boats.

Federal regulators have been contemplating deep cuts or a near-total prohibition on cod fishing by New England's fishing, despite some uncertainty over whether or not there's a sustained decline of the cod population offshore.

Fishermen insist that there are plenty of cod and that the real problem is fuzzy science. They say the data are grossly inconsistent, pointing to a 2008 federal report that concluded that Gulf of Maine cod, though historically overfished, were well on the way to recovery.

The news is causing high anxiety in Massachusetts, where a wooden “Sacred Cod” has hung in the State House for more than 200 years and the fishing industry, though struggling, still figures prominently in the state’s identity.

“I can’t think of another fishery shutdown that would have the economic consequences of this,” said Steven Cadrin, a scientist at the University of Massachusetts, Dartmouth, who helped with the assessment.

From May 2010 to April 2011, commercial fishermen caught about nine million pounds of Gulf of Maine cod, according to the New England Fishery Management Council, earning more than $2 per pound on average.

Last year NOAA officials put more than 2100 square miles of prime fishing ground off limits to New England fishermen in a move to protect an estimated 90,000 harbor porpises. Despite their relatively abundant numbers, the species is under the protection of the Marine Mammal Protection Act.
Posted by Fenway_Nation at 10:43 PM