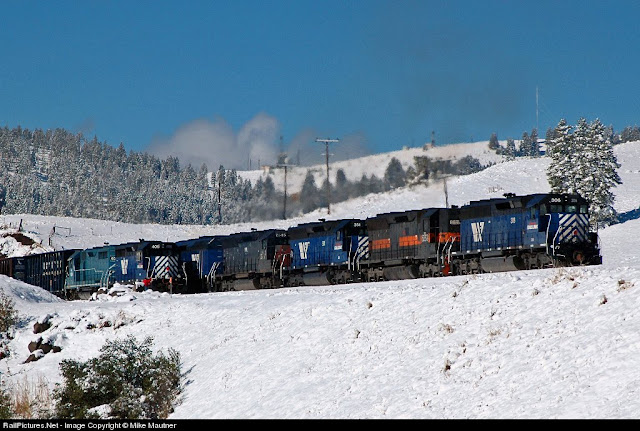 Today's train of thought takes us to Big Sky country and features some oldies but goodies as well.

Sometimes known as 'The Main Street of Southern Montana', the regional railway Montana Rail Link boasts a fairly eclectic mix of motive power to this day. Started in the late 1980s, the Montana Rail Link started operations with the lease of nearly 900 miles of former Northern Pacific mainline between Sand Point, ID and Billings, MT from Burlington Northern. While the MRL handles forestry products, grain and gas, a good deal of the MRL's traffic base is simply overhead from BNSF between the midwest and ports and markets in the Pacific Northwest.

Here, railpictures.net contributor Mike Mautner caught a fairly odd and colorful assortment of motive power on Bozeman Pass to the west of Livingston, MT in early October 2005. Closest to the photographer is Montana Rail Link SD45-2 #306, followed by a high hood former Guilford (nee Norfolk & Western) SD45 still sporting charcoal grey and orange, followed by a MRL SD45, a rebuilt former Southern Pacific SD45R still in scarlet and grey and a MRL F45. This motley lashup is actually heading away from the photographer, shoving hard on the rear of BNSF symbol freight HKCKPAS [Kansas City, MO to Pasco, WA- also known as 'The Boeing train' since it often carries 737 fuselages between Boeing facilities in Wichita, KS and Renton, WA- NANESB!]. Waiting in the siding for the BNSF freight and MRL helpers to clear are a pair of MRL GP35s with local freight #841, bound for Livingston.

2005 marked the year that Montana Rail Link broke with tradition and purchased 16 brand-new SD70ACE's from EMD [most regional and shortline railroads typically take advantage of a fairly robust market in secondhand motive power- NANESB!]. The new EMDs would've been on the property for only a few weeks before the above picture was taken. Although a number of older SD40s and SD45s soldier on in service on today's MRL, the #306 was scrapped in 2011 while the #680 was cut up in 2008.
Posted by Fenway_Nation at 11:50 PM