Horror In Brazil As Hundreds Perish in Nightclub Blaze 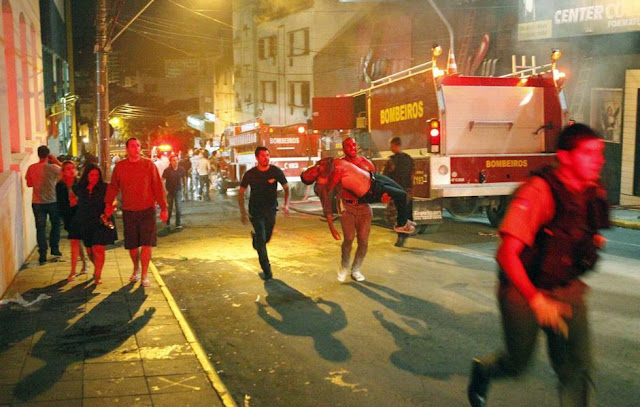 More than 230 people are dead after a deadly fire swept through a packed nightclub in southern Brazil in the early morning hours of Sunday.

Witnesses at the Kiss nighclub in the southern college town of Santa Maria said the fire appeared to have been sparked by a the band setting off fireworks on stage and that there was only one exit. Firefighters responding to the blaze at first had trouble getting inside the Kiss nightclub because bodies partially blocked the club's entryway.

Officials at a news conference said the cause was still under investigation -- though police inspector Sandro Meinerz told the Agencia Estado news agency the band was to blame for a pyrotechnics show and that manslaughter charges could be filed.

Television images showed black smoke billowing out of the Kiss nightclub as shirtless young men who had attended a university party joined firefighters using axes and sledgehammers to pound at windows and hot-pink exterior walls to free those trapped inside.

Bodies of the dead and injured were strewn in the street and panicked screams filled the air as medics tried to help. There was little to be done; officials said most of those who died were suffocated by smoke within minutes.

Within hours a community gym was a horror scene, with body after body lined up on the floor, partially covered with black plastic as family members identified kin.

Outside the gym police held up personal objects -- a black purse, a blue high-heeled shoe -- as people seeking information on loved ones looked crowded around, hoping not to recognize anything being shown them.

Guido Pedroso Melo, commander of the city's fire department, told the O Globo newspaper that firefighters had a hard time getting inside the club because "there was a barrier of bodies blocking the entrance."

Teenagers sprinted from the scene after the fire began, desperately seeking help. Others carried injured and burned friends away in their arms. Many of the victims were under 20 years old, including some minors.

"There was so much smoke and fire, it was complete panic, and it took a long time for people to get out, there were so many dead," survivor Luana Santos Silva told the Globo TV network.

The fire spread so fast inside the packed club that firefighters and ambulances could do little to stop it, Silva said.

Another survivor, Michele Pereira, told the Folha de S. Paulo newspaper that she was near the stage when members of the band lit flares that started the conflagration.

"The band that was onstage began to use flares and, suddenly, they stopped the show and pointed them upward," she said. "At that point, the ceiling caught fire. It was really weak, but in a matter of seconds it spread."

Guitarist Rodrigo Martins told Radio Gaucha that the band, Gurizada Fandangueira, started playing at 2:15 a.m. "and we had played around five songs when I looked up and noticed the roof was burning."

"It might have happened because of the Sputnik, the machine we use to create a luminous effect with sparks. It's harmless, we never had any trouble with it.

"When the fire started, a guard passed us a fire extinguisher, the singer tried to use it but it wasn't working."

He confirmed that accordion player Danilo Jacques, 28, died, while the five other members made it out safely.

Police Maj. Cleberson Braida Bastianello said by telephone that the toll had risen to 233 with the death of a hospitalized victim. He said earlier that the death toll was likely made worse because the nightclub appeared to have just one exit through which patrons could exit.

Survivors said security guards briefly tried to block people from exiting the club. Brazilian bars routinely make patrons pay their entire tab at the end of the night before they are allowed to leave.

Authorities believe that most of the dead were killed by asphyxiation and stated that another 117 victims were being treated for burns and smoke inhalation in nearby hospitals. Brazilian media reports stated that there was as many as 2,000 people packed into the club at the time.

Santa Maria is a university and military town of about 250,000 in the fairly wealthy southern state of Rio Grande do Sul. Sunday morning's fire was the worst fire since a 1961 circus fire in Niterói, Rio de Janeiro that killed 500- most of them children.
Posted by Fenway_Nation at 11:53 PM