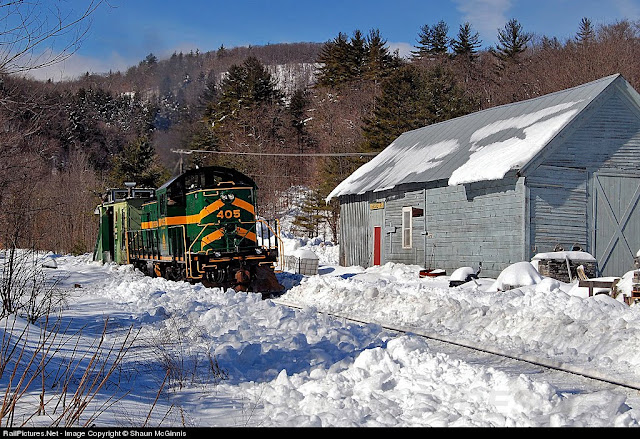 Today's Train of Thought takes us to Vermont and features a denizen of the Green Mountain State that may very well have never left Vermont [aside from the occasional sojuorn to Chatham, NY or N. Walpole, NH- NANESB!].

Over the last 50 years, Vermont has seen a number of railroads come and go- the Rutland, Delaware & Hudson, Hoosac Tunnel & Wilmington, Boston & Maine, Maine Central, Lamoille Valley and even the Central Vermont.

The original Rutland Railway operated out of its namesake town in western Vermont with a line that went north to Burlington, VT before crossing the northern end of Lake Champain on a series of causeways and continuing west to Lake Ontario at Orangeburg, NY. To the South, the Rutland interchanged with the New York Central at Chatham, NY via Bennington, VT on what was dubbed the 'Corkscrew Line'. And to the east, the Rutland connected with the Boston & Maine and Central Vermont at bellows Falls with a line that slashed a southeasterly course through the Green Mountains.

By the early 1950s, the Rutland had full dieselized, utilizing ALCo roadswitchers manufactured in nearby Schenectady, NY. However, a nearly month-long strike in 1953 caused the cessation of passenger service and also resulted in the loss of a number of shippers. A more prolonged labor dispute that began in 1961 triggered the permanent shutdown of the Rutland two years later.

Much of the Rutland's motive power was dispersed- the ALCo RS3s were sold off to the Louisville and Nashville in 1963, only to be used as trade-ins for new EMDs a few years later. While some of the RS1s ended up going as far afield as Arkansas, a few ended up staying close to home, pressed into service on the Vermont Railway or Green Mountain startups that were operating on the former Rutland Railway. While the lines to Orangeburg, NY and Chatham, NY were quickly abandoned the Vermont Railway took over operations on the line between Essex Jct and North Bennington while the Green Mountain operated out of the Rutland's old hub and over the mountains to Bellows Falls.

This included the 1951-built #405 which entered service on the Green Mountain under the same number. The Green Mountain also operated a pair of former Illinois Terminal RS1s and Delaware & Hudson ALCo S-series switchers- but the #405 was the only unit on the roster with the Rutland pedigree.

Despite the advent of EMD's on the Green Mountain roster in the late 1980s, the GMRC continued using the #405 in excusrion and switcher service. The other ALCos departed the roster, but may of them didn't go too far [the former Illinois Terminals RS1s ended up on the Catskill Mountain Railroad in New York and Danbury, CT Railway Museum while one of the ex D&H ALCos is still working for the nearby Claremont & Concord Railroad- NANESB!]. Even when the Vermont Railway acquired the Green Mountain Railroad outright in 1997 (reconstituting much of the old Rutland Railway in the process) the new Vermont Railway System- mindful of its heritage- continued operating the green and yellow 1000 HP relic alongside much newer and burlier locomotives.

In fact, with the recent uptick of traffic on the former Green Mountain Railway, the 62 year old ALCo RS-1 can be seen earning her keep switching VRS yards, powering extra freights or even occasionally doing duty as a helper unit. This is in addition to the #405's usual role as power for the White River Flyer or seasonal excursions for the Vermont Rail System.

Now granted words like 'timeless scene' get thrown about a little too often, but that's exactly what railpictures.net conributor Shaun McGinnis has managed in the above image. Was the picture taken shortly after the Rutland took delivery of the 1951-build diesel or last week?

Here, the #405 (actually heading away from the photographer) is seen shoving a Russel snowplow through Gassets, VT after a fresh snowfall on Valentine's Day 2008. The little loco is cresting the Green Mountains and is about halfway through its trek of clearing the line between Bellows Falls and Rutland. According to McGinnis, the #405 got caught up in some accumulated ice at a crossing a few miles up the road and it required another hour or two for the Rutland diesel and Russel plow to get un-stuck.
Posted by Fenway_Nation at 10:39 PM