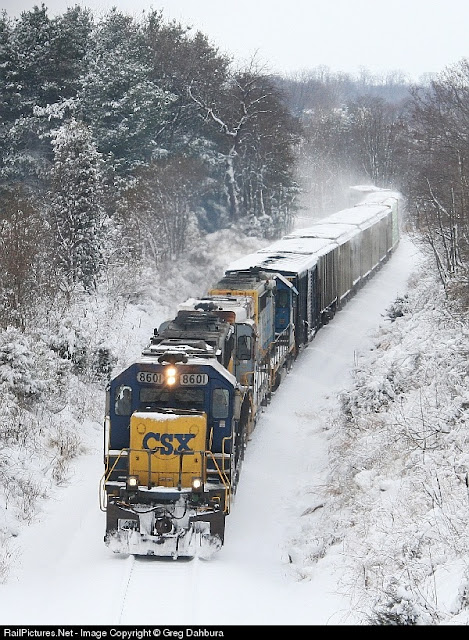 Today's Train of Thought takes us to Maryland and CSX's Hanover Subdivision. The former Western Maryland line links the regional rail hub of Hagerstown with a number of on-line customers and the Maryland Midland railroad at Highfield, MD. Once upon a time, the former Western Maryland line continued all the west through the Alleghanies through to Pittsburgh, but was considered redundant upon the WM beign acquired by the Chessie System in the 1970s and much of the line was incrimentally abandoned or sold off.

Here, railpictures.net contributor Greg Dahbura caught CSX SD50 #8601 snaking around the curve at Smithsburg, MD with symbol freight B702. The train is climbing towards the Blue Ridge summit in the midst of a snowstorm on February 12, 2006.
Posted by Fenway_Nation at 11:21 PM