Alberta Bound Sports Chowdah Update- What Can Browns Do For You? Slick Bruins Get Past Oilers Thanks to Iginla 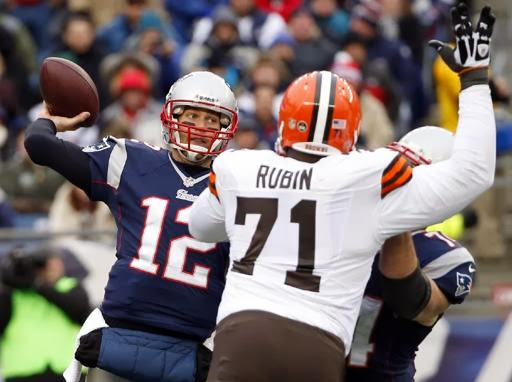 NFL- It doesn't seem to matter who the opponent is- ever since that Monday night game against the Carolina Panthers, the Patriots have this habit of falling into a hole in the first half and then climbing out of it in the second half.

Sunday afternoon's game- which pitted Belichick against the team that gave him his first head coaching gig in the NFL- was no different. In fact, after the Cleveland Browns jumped out to a 6-0 in a sluggish first half and only added onto that lead in the 3rd quarter. With Cleveland leading 12-0, things only got worse for New England as Rob Gronkowski was knocked out of the game after a 21 yard completion.

The Patriots got on the board thanks to a short FG from Gostkowski to make it 12-3 but Cleveland would jump out to a 19-3 lead late in the 3rd thanks to an 80 yard TD reception from Jason Campbell to WR Josh Gordon. With less than 1:20 to go in the 3rd, New England got great field position thanks to a 28 yard return from Josh Boyce. Brady then connected with Shane Vereen twice for gains of 50 and 16 yards, respectively- giving New England the ball on the Browns 6. Vereen then punched it in for the TD and Brady successfully connected with Edelman for a 2 point conversion to make it 19-11 to close out the 3rd quarter.

After a drive that took nearly 6 minutes, the Patriots once again got on the board but had to settle for a Gostkowski FG from the 50 after Brady was flagged for intentional grounding and then sacked inside the Brown's 30 yard line.

The Browns responded with a drive of nearly 3 minutes that started out on their own 13 but ate up huge chunks of yardage before Campbell connected with TE Jordan Cameron from the New England 4 yard line for the TD. This put the Patriots in a 26-14 hole with a mere 2:39 to go in regulation.

At this point, most fans would've changed the channel of started walking out of the stadium. With just over two and a half minutes to go and the Patriots pinned back on their own 10 yard line, even if the Patriots could get another TD, they'd still be down 26-21 with (in all likelihood) less than a minute to go. And that was assuming the Patriots COULD get a quick score out of Brady and the offense.

Alternating between Vereen and Julian Edelman, Brady and each receiver was able to take advantage of the sideline while getting chunks of yardage against the Browns' defense, getting the ball as far as the Cleveland 2 before Brady connected with Edelman to hit paydirt on 3rd and goal and made it a 21-26 game. Moreover, a penalty was assessed against the Browns on the Edelman TD pass that would be enforced from the kickoff.

If you were still watching, you had to wonder if there was anything else New England could do to pull off the comeback. Of course, if the onside kick from the 50 wasn't recovered it would be a moot point as all Cleveland had to do was get a first down and bleed out the clock if they recovered it.

They didn't. Gostkowski's kick didn't go the necessary 10 yards, but a Browns player was the first to touch it and Kyle Arrington recovered for New England at the Browns 41.

After a 10 yard pickup from Brady to Amendola, Brady attempted to throw to Boyce in the end zone, but the pass attempt was incomplete. Officials called Browns CB Leon McFadden for pass interference and since the infraction took place in the end zone, the ball was automatically placed on the 1 yard line. With 31 seconds to go, Brady found Amendola in the end zone to give New England their first lead of the day. The two point attempt failed, but New England was nursing a 27-26 lead with 30 seconds to go.

However, the way Campbell had been playing for the Browns on Sunday afternoon, 30 seconds might've been too much time to give the Cleveland offense. After starting out on their own 20, Campbell got Cleveland as far as the Patriots 40. With a sense of deja-vu, kicker Billy Cundiff came out for a 58 yard FG attempt with 2 seconds left in the game. There was no 'Hand of Myra' this time around as Cundiff's kick fell short of the uprights- New England barely holds on for the 27-26 win.

Tom Brady went 32-52 with an interception, 418 yards and 2 TDs while Jason Campbell went 29-44 with 391 yards and 3 TDs, but the real story was and remains the loss of Gronkowski for the rest of the season. Further examination after the game showed Gronkowski suffered from a torn ACL after the 3rd quarter hit.

A depleted Patriots team will travel down to Miami on Sunday to take on the Dolphins, who are currently 2nd in the AFC East and sitting pretty in the wild card chase as well. Kickoff is scheduled for 1:00 ET on Sunday from Miami and the game will be televised on CBS.

NHL- After last week's loss to Montreal, the Boston Bruins are on a 4 game winning streak, three of those wins coming at the start of a lengthy road trip north of the border. This includes a sweep of the province of Alberta where the Bruins bested Jarome Iginla's former team, the Calgary Flames, in the Saddledome before Iginla scored two goals for Boston against the Oilers in Boston's 4-2 win over Edmonton at Rexall Palace.

The Bruins will next take on the Vancouver Canucks at Rogers Arena on Saturday night with a scheduled start time of 10:00 ET on Saturday night. The rematch of the 2010-2011 Stanley Cup Finals will be televised on NESN and the CBC.
Posted by Fenway_Nation at 11:13 PM