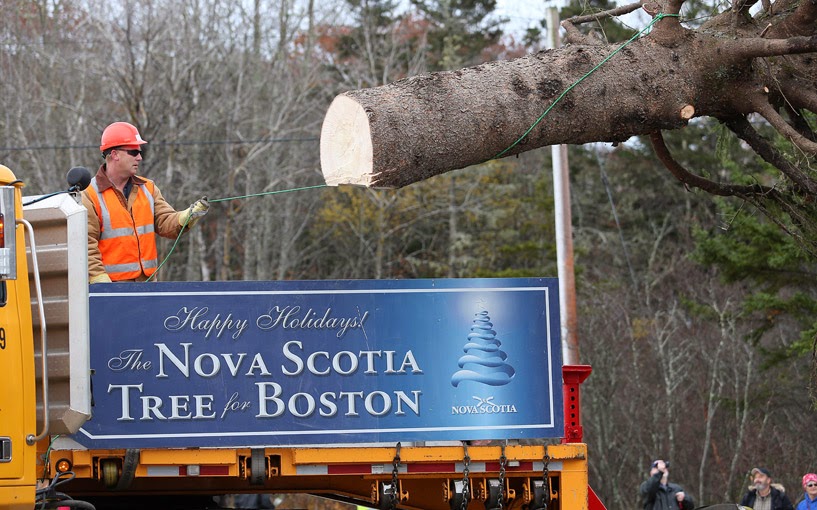 For the 42nd consecutive year, a Christmas Tree gifted to the City of Boston by the province of Nova Scotia has made its way to Boston Common.

After being sent off in a ceremony at the property of Mary Lou Milligan of Mill Cove, NS last month the Tree for Boston was also featured in a parade in Halifax before departing for the Bay of Fundy ferry. The 47 foot white spruce is said to be more than 50 years old. Significantly, the tractor trailer carrying the tree was escorted out of Halifax this year by runners to commemorate the dead or wounded in the Patriot's Day Boston Marathon bombing.

The Christmas Tree for Boston tradition dates back to the horrific 1917 Halifax explosion. During WWI, the Mont Blanc- a French munitions ship- collided with another vessel and caught fire. The ensuing explosion killed some 2000 people and is widely believed to be the largest man-made blast prior to the advent of the nuclear bomb. Word of the blast reached the outside world thanks to a railway telegrapher named Vince Coleman who also perished in the explosion. The blast leveled buildings within a mile and a half of the harbor, leaving many trapped under the rubble. Making matters worse, a blizzard was closing in on Halifax that night

As the injured and homeless were being evacuated, the Massachusetts Red Cross was able to muster a trainload of doctors, nurses, medicine and tents to treat the wounded. Moving through Maine and the Maritime provinces in the middle of a blizzard, the train arrived in Halifax the following morning.

As a token of their appreciation, the city of Halifax sent Boston a Christmas tree the following year. The tradition was dormant until the early 1970s when it was revived by the Lunenburg County Christmas Tree Producers Association. 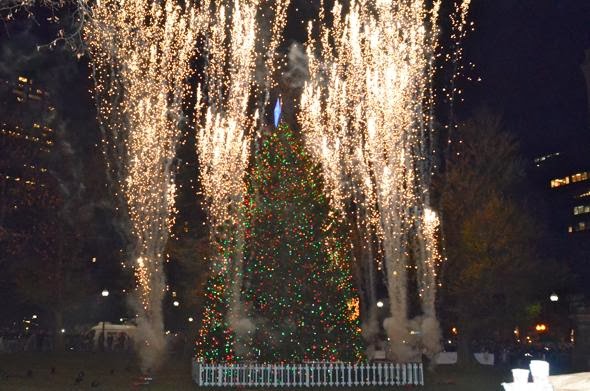 Like last year, the tree's journey could be followed on Facebook or Twitter or Facebook and after its arrival in Boston. The tree was lit in a December 5th ceremony on Boston Common featuring fireworks, live music and figure skaters.
Posted by Fenway_Nation at 11:47 PM