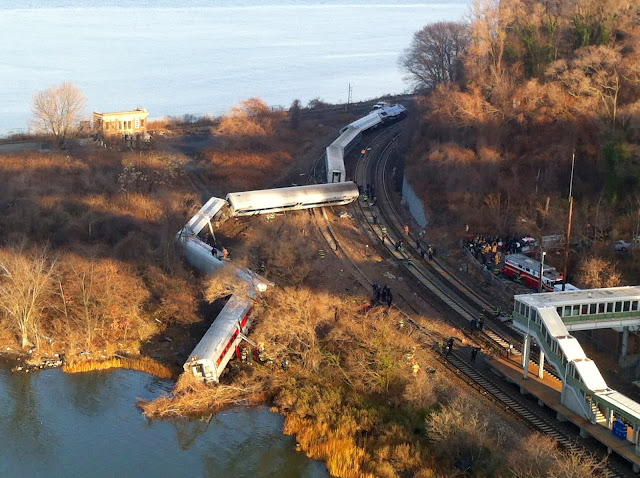 NEW YORK- At least four people were killed and 70 injured on Sunday morning when a Metro-North commuter train derailed just north of the Spuyten Duyvil station in the Bronx.

Early reports indicate that the train was travelling at speeds in excess of 80 MPH as it headed into a curve along the Harlem river where the maximum speed limit is 30 MPH. The National Transportation Safety Board is leading the investigation and has recovered two event recorders from the crash site. At the time, the train was operating in 'push-pull' mode where the train appears to be running backwards with the locomotive pushing from the rear and controlled by the engineer in a specially equipped enclosure in the 'trailing' car. This is fairly common practice among a number of commuter rail agencies as well as some Amtrak routes.

The NTSB was already investigating a derailment and collision between two Metro-North trains along the Northeast Corridor in Connecticut back in May as well as the crashworthiness of the Kawasaki-built passenger cars involved in the May accident. In July, a northbound CSX garbage train derailed by the Spuyten Duyvil station and snarled commuter traffic overnight. According to officials there were no problems with the condition of the tracks near the depot at the time of Sunday's derailment.

The cellphone records and blood samples of the engineer- who survived the wreck and was released from the hospital- have been taken, but no word on the results from the NTSB yet.

NEW MEXICO- Three people were killed over the weekend when a freight train carrying ore derailed and the locomotive fell into a creek in southwestern New Mexico.

New Mexico State Police released the names of the three on board the Southwestern Railroad freight train which was operating between the massive Freeport McMoran open put copper mine in Santa Rita, NM and the Southwestern yards at Hurley, NM. The eight carloads of iron ore the train was hauling remained upright while the locomotive- a former Conrail GP40- landed on its side after falling roughly 50 feet into an arroyo.

Law enforcement previously reported that all three victims were men, however, one of the victims was a woman, Ann Thompson, 50, originally from Paulden, Ariz. The other two victims were Donald White, 38, of Silver City, and Steven Crose, 60, also of Paulden, Ariz.

Crose and White both worked for the railroad. Thompson was Crose's girlfriend, said Wanda Shepard, Crose's cousin. It is also unknown why Thompson was inside the locomotive at the time of the crash as she did not work for Southwestern Railroad, Shepard said. Both Thompson and Crose had recently moved to the Hurley area just three weeks ago for Crose's job.

"They loved being on the train," Shepard said of White and her cousin. "They loved it. It was their calling, and they were really proud of their jobs and what they did."

Although the train was carrying no hazardous materiel, the fire department from nearby Silver City, NM was called in to contain a diesel spill from the derailed locomotive.

A subsidiary of Western Railroad Builders, Inc, the Southwestern operates two disconnected lines in southern New Mexico. In 1990, the railroad purchased a cluster of former Santa Fe lines radiating out of Whitewater, NM to copper mines in Tyrone and Santa Rita in Grant County, NM. By 1994, the line from Whitewater to the then-Southern Pacific interchange in Demming, NM was purchased from the Santa Fe and by 2002, Western Railroad Builders agreed to a lease with BNSF for the line between Demming and Hatch, NM. To the east, the Southwest began operations on more than 200 miles of former BNSF trackage between Clovis and Carlsbad, NM when they entered into a lease agreement with the BNSF in 2004.

Western Railroad builders also operates the 250+ mile Cimarron Valley Railroad in Kansas, Oklahoma and Colorado as well as the 40-mile Arizona Central out of Clarkdale, AZ.

ALBERTA- The Canadian National Railway suffered two derailments in the province of Alberta in the span of a few weeks, one of them prompting the evacuation of a nearby town.

On October 19th, a Canadian National train hauling oil and LPG derailed near the village of Gainsford, AB west of Edmonton at approximately 1 AM local time. Witnesses reported hearing a loud series of crashes before seeing a fireball shoot up into the sky. After evacuating nearby residents and shutting down the Yellowhead Highway which runs parallel to the CN line, emergency crews decided the safest option would be to allow the fire to burn itself out.

In the early morning hours of Nov 3rd, a second Canadian Nation freight train derailed outside the hamlet of Peers, AB- also west of Edmonton. That train was determined to be carrying lumber and sulphur Dioxide, a hazardous material but not as volatile as oil or LPG. 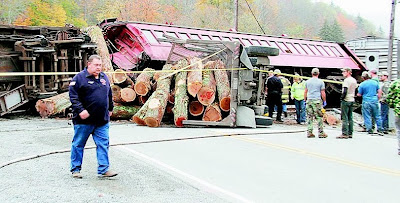 WEST VIRGINIA- At least one person was killed and 42 others were injured when a logging truck slammed into a Durbin and Greenbrier Valley excursion train at a grade crossing in the remote eastern part of the state.

According to the Randolph County Sheriff's Office, the driver of the log truck was the sole fatality of the collision and when they arrived on the scene, the gates and flashing lights on the crossing were functioning.


Randolph County Sheriff Mark Brady said two of the train’s passenger cars flipped on their sides after impact at a rail crossing with a mountain highway, the log truck was rendered a “total loss” and the truck driver was pronounced dead at the scene.

The truck driver was not immediately identified and news photographs from the scene at West Virginia’s Cheat Mountain showed large, heavy logs jumbled beside the two toppled train cars amid a chaotic scene of first responders aiding shaken passengers leaving the train.

Brady said the accident occurred at a train crossing on U.S. Route 250 at a bridge on the mountain. The overturned passenger cars lay beside the tracks, roped off with yellow crime scene tape as police, firefighters and others looked on.

Headquartered in Elkins, WV the West Virginia Central railroad operates more than 130 miles of former Western Maryland trackage in the eastern part of the state. Although it does intermittently haul freight, excursion trains such as the New Tygart Flyer, Durbin Rocket and Cheat Mountain Salamander have proven big draws for the line. Future plans for the line include re-opening a connection with the Cass Scenic Railway, a former logging railroad now a state park and tourist hauler as well as establishing a permanent home for the West Virginia Railroad Museum in Randolph County along the WVCR right-of-way.
Posted by Fenway_Nation at 3:52 PM