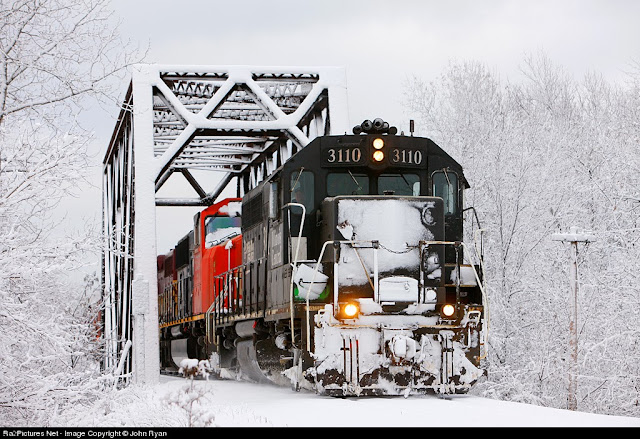 Today's Train of Thought takes us to Michigan's Upper Peninsula for weather conditions best described as a 'winter mix' which is mostly snow, sleet and freezing rain all taking place at temperatures below freezing.

Here, railpicture.net contributor John Ryan caught Illinois Central GP40-2 #3110 leading a southbound Canadian National merchandise freight over the Cedar River at Powers, MI on December 28th, 2008. The white stuff is clinging not only to the tree branches, telephone poles and truss bridge, but also the nose of the #3110 and the broom kept on the front of the unit. In the process, the white stuff is also obscuring the 'death star' Illinois Central logo on the nose- a moniker applied to the logo that came with the IC's final paint scheme prior to the 1998 takeover of IC by Canadian National.
Posted by Fenway_Nation at 11:57 PM