An explosion at an ammunition plant in Southern Yemen on Monday is said to have killed scores of civilians- some of them burned beyond recognition- who were looting the factory after anti-government militants seized control of the 7th of October plant and nearby town of Jaar before leaving with armoured vehicles and cases of weapons and ammunition.

After they left, nearby residents reportedly began taking down cables and doors from the factory while siphoning fuel from abandoned vehicles and dumping out containers of gunpowder so they could use them to store more water.

According to local residents, the cause of the blast appears to be accidental- something likely sparked the gunpowder stored at the facility.

Yemeni officals, however, haven't ruled out the possibility of sabotage or the militants booby-trapping the facility after taking what they could.

The takeover of the factory by Salafist Islamic militants and subsequent explosion is just the latest in a series of problems facing the Western-backed President Ali Abdullah Saleh, with antigovernment protests calling for his removal gaining momentum over the last two months and Al Qaeda allied militants and tribesmen exerting increased control over much of the country's interior. The continued unrest in the capital and ongoing insurgency in the hinterlands threatens to destabilize the strategically located Arab nation. 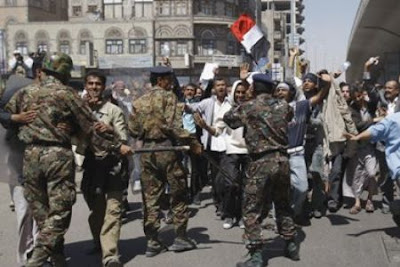 Earlier this month, at least 40 people were killed in clashes between protesters and Yemeni security forces outside the entrance of Sanaa University prompting Saleh to declare a state of emergency.
Posted by Fenway_Nation at 10:01 PM