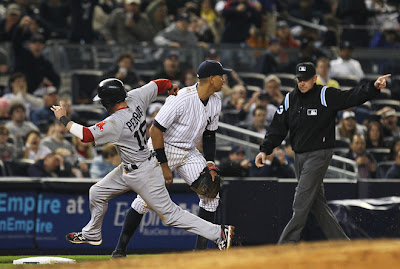 MLB: After their horrendous 0-6 start last month, the Red Sox have finally reached the .500 mark on Sunday night after comleting a 3-game sweep of the New York Yankees in the Bronx.

Friday night's game was something of a cliffhanger, with the Sox fending off a late Yankees rally to close out a 5-4 win. The following day, the Red Sox scored late and scored often in a 6-0 rout that pitted Josh Beckett against CC Sabathia. However, that gem was apparently overshadowed by the controversey surrounding Yankkes cathcer-turned-DH (and batting .165) Jorge Posada taking himself out of the game after it was announced he'd be hitting 9th in the lineup.

Sunday night's affair in the Bronx had Jon Lester on the mound against Freddy Garcia. The Yankees got to Lester pretty early, starting off with a Mark Teixeria RBI single in the first and giving up home runs to Andruw Jones and Curtis Granderson in the bottom of the 2nd to give the Yankees a 4-1 lead. However, the very next inning, Kevin Youkilis belted a 3 run homer to tie the game up at 4-4 while Big Papi hit a solo shot to right in the 5th to give the Red Sox a 1-run lead.

Of course, given the potent Yankees offense, a 1-run cushion didn't feel like it was enough but the Sox were able to add to that when Pedroia went home an a fielding error by Alex Rodriguez to make it 6-4.

The Yankees would get one back in the bottom of the 7th, but Jarrod Saltalamacchia cranked a solo homer to right field in the top of the 8th to make it 7-5, and Papelbon would come on in relief of Bard to close out the game, giving Boston not only the win, but a sweep of the weekend series at the Bronx and putting them at .500 for the first time this season.

Even though Daisuke Matsuzaka had an off night on Monday, the Red Sox came from behind and won on 1B Adrian Gonzalez's 1-out 2 RBI walk off double in the bottom of the 9th at Fenway to put the Sox over .500 for the first time this season. Meanwhile, the Yankees woes continued with a 6-5 loss against Tampa Bay on Monday night. The loss puts them a game under .500.

The Sox will close out their quickie two game series against Baltimore on Tuesday when they face rookie southpaw Zach Britton (5-2; 2.42 ERA). Tim Wakefield (0-1; 5.40 ERA) is expected to fill in as starter for Tuesday's game.

OTHER RED SOX NEWS: John Lackey, who was the scheduled starter for Tuesday's game against Baltimore, has been placed on the 15-Day DL with a right elbow strain. Although the team recalled Scott Atchison from AAA Pawtucket, it is expected that knuckleballer Tim Wakefield will get that start on Tuesday.

OTHER MLB NEWS: Hall of Famer and Minnesota Twins slugger Harmon Killebrew announced over the weekend that he will no longer treat his esophageal cancer and has entered hospice care. The 74 year old announced back in December that he was battling cancer. Killebrew's major league career spanned 21 years with the Washington Senators, Minnesota Twins and Kansas City Royals, with 13 of those seasons being spent in the Twin Cities.

NHL: All that time off for the Bruins led to some concerns about 'rust' and it showed on Saturday night when the Bruins gave up 3 even strnegth goals in less than 90 seconds (Sean Bergenheim, Brett Clark and Teddy Purcell) in the first period.

Altho' Tyler Seguin would score late in the 1st, Tampa would get some insurance in the 3rd and skate to a pretty easy 5-2 win for Game 1 of the Eastern conference finals.

OTHER BRUINS NEWS: Although head coach Claude Julien declined comment on his availability for Game 2, Patrice Bergeron returned for his first full practice since sustaining a concussion on May 6.

NBA: And just like that, it's over. Despite Rajon Rondo's gritty performace with a dislocated elbow in Game 3 and forcing overtime in Game 4, the Celtics season is over after the Miami Heat cruised to a 97-87 win on May 11 to win the series 3 games to 1.

The Heat now face the Chicago Bulls in the Eastern Conference finals (and now trail 0-1 after Sunday night). Out west, the matchup will feature the Dallas Mavericks against the Oklahoma City Thunder in what I'm sure some columnist or blogger will call the I-35 series.
Posted by Fenway_Nation at 11:41 PM