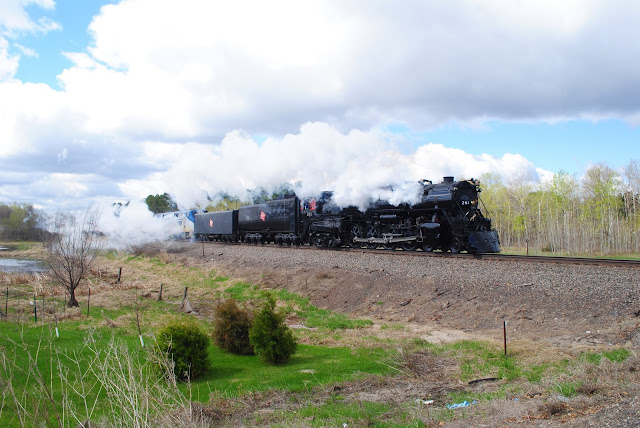 Restored former Milwaukee Road ALCo 4-8-4 #261 seen chugging northbound on the BNSF Hinckley subdivision at Andover, MN with an excursion between Minneapolis and Duluth, MN on May 11, 2013- National Train Day.


Even though it shares the weekend with the much more time-honored holiday of Mother's Day, Saturday May 11th marks National Train Day.

While some holidays are dismissed as nothing more than mere creations of the greeting card cartels, Amtrak has a hand in promoting this much more recent holiday. The date is meant to coincide with the May 10th, 1869 ceremonial driving of the Golden Spike on the Transcontinental Railroad in Promontory Point, UT. Since Amtrak sponsors a number of Train Day events nationwide, its hardly surprising that the emphasis is primarily on passenger rail [although I thought this would be a good opportunity for freight railroads to promote themselves to the public- NANESB!].

Unsurprisingly, a number of railroad museums also participate in this holiday to either recruit new members, attract additional visitors and raise funds for ongoing restoration projects. These activities can include anything from static displays to guided tours of facilities to mainline steam excursions.

Perhaps the highlight of this year's National Train Day was Milwaukee Road #261's first excursion in more than four years, taking passengers up from the Twin Cities to Duluth in restored Milwaukee Road passenger cars. Other steam locomotives fired up for the occasion include Nickel Plate #765 which was scheduled to haul a Norfolk Southern employees special in northeastern Ohio and Spokane, Portland & Seattle #700 was on display at Portland Union Station in Portland, OR.

Of course, appreciation of trains doesn't have to be limited to early May- you can always find out more about the railroad heritage in your part of the country by finding your nearest railroad museum or National Railroad Historical Society (NRHS) chapter.
Posted by Fenway_Nation at 9:27 PM