MLB: After a fairly unimpressive continuation of their West Coast road trip where they dropped 2 out of 3 to the Orioles, the Red Sox made their way back to Fenway on Friday to start off an 11-game homestand. That didn't go too well, either- although struggling OF Carl Crawford got his 3rd RBI of the season at Fenway (7th overall) to break a 2-2 deadlock in the bottom of the 9th for a 3-2 Boston win.

On Monday, the Red Sox continued their homestand against one of the few teams they had early success against this season as they played host to the Angels.

However, despite the 4 game sweep on the Angels on the road the Red Sox had yet to face Jered Weaver, who was coming into Monday night's game undefeated in his 6 starts and with a 0.99 ERA.

The Angels took the 2-1 lead in the top of the 5th inning off of Clay Bluccholz but after a 1-out double from the Carl Crawford [should I use the adejctive 'struggling' anymore?- NANESB!] and walking Varitek, Jacoby Ellsbury hit into a fielder's choice ('Tek was out at second). With 2 away, Ellsbury managed to steal second while 2B Dustin Pedroia was fouling pitch after pitch from Weaver off in a tenacious 13-pitch at bat that culminated in a 2-RBI single to put the Red Sox up for good.

Adrian Gonzalez added some considerable insurance with the bases loaded in the bottom of the 7th with a bases-clearing double, followed by Youk bringing in Gonzalez with another RBI double and Big Papi cranking one into the Monster seats to make it 9-2 Boston. The Angels would get a couple of runs back in the top of the 8th and 9th, but Hideki Okajima would close things out and Boston wins by a final of 9-5. 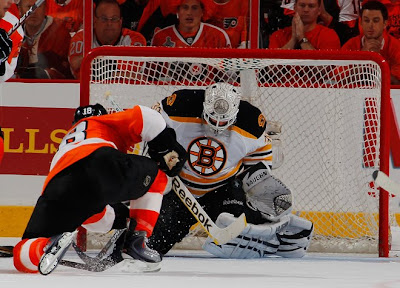 NHL: After winning game 1 of the Eastern Conference Semifinals by a 7-3 final, the Bruins would need overtime for the 4th time in this year's playoffs.

Philly took the early 2-0 lead on two goals from James Van Riemsdyk about nine minutes apart in the first before the Bruins would tie it up on goals from Chris Kelly and Brad Marchand to close out the first at 2-2.

And that was all the scoring there was in regulation, believe it or not. Philly netminder Brian Boucher would leave halfway through the second with some sort of injury and have Sergei Bobrovsky fill in for him between the pipes until returning in the 3rd period- Bobrovsky would stop all 6 shots faced.

Tim Thomas, on the other hand, stayed in net throughout the entire game stopping 52 out of 54 shots faced, including all 46 shots sent his way by the Flyers after allowing goal #2 in the first.

David Krejci would break the deadlock 6 minutes into the OT, getting one past Boucher even though the lineman signalled 'no goal' and play continued for another 18 seconds. The play was then reviewed by video and Kejci's shot was ruled a goal.

This puts Boston ahead 2 games to none with the series heading back to Boston on Wednesday ngiht. As glad as I am they're up, it's still pretty early to bust out the champagne and start drunkenly slurring 'Na na na na Hey hey hey.....good byyye!' in light of what happened in last year's eastern conference finals and- more recently- the fact that Montreal started off the last series with back to back wins on the road.

The series resumes on Wed, May 4 at the garden at 7PM ET. The game will be televised on the VS network. 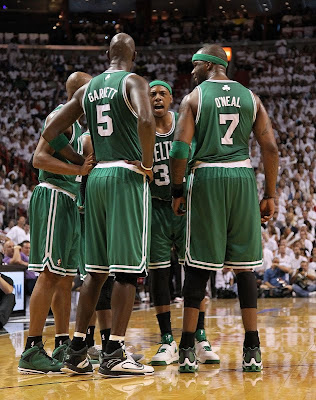 NBA: With a whole week off before facing their next opponent, it probably wouldn't be too surprising that there would be some rust as the Celtics took on the Miami Heat.

Dwayne Wade had a 38 point night for Miami while Guard James Jones came off the bench for 25 points on Sunday afternoon's game.

Ray Allen led the Celtics scoring with 25 points in the 99-90 loss to Miami in Sunday's game- Paul Pierce had 19- everybody else was held to single digits.

Game 2 will get underway Tuesday Night in Miami at 7PM ET and will be televised on TNT.

NFL: Looks like the on-again off-again NFL lockout is back on again less than a week after a federal judge in Minnesota had it overturned. An appeals court in St. Louis had issued a temporary ruling in the NFL's favor. The 3-judge panel had ruled 2-1 in favor of the league pending a June 3 hearing.

NEW ENGLAND PATRIOTS: The Patriots selcted Colorado University tackle Nate Solder with their first round pick of the 2011 draft. Virginia's Ras-I Dowling at cornerback and Cal RB Shane Vereen picked up in the 2nd round. Of course, there's the whole question of whether or not there's going to be a 2011 season for the Class of 2011, let alone how much playing time they'll get... 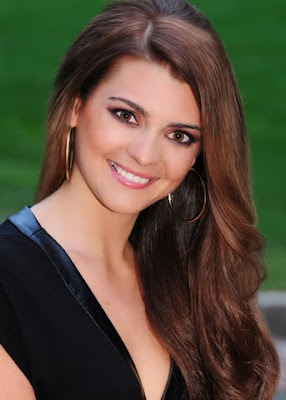 OTHER PATRIOTS NEWS: The Daughter of former BC/Patriots QB Doug Flutie has managed to land a spot on the 2011 New England Patriots cheerleading squad (although again- with the lockout looming, whether or not there's a 2011 season will depend on the labor situation).

Flutie, a Miss Massachusetts finalist as well, is currently a resident of Natick, MA 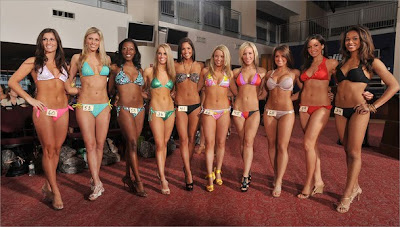 Alexa and the other finalists will be introduced at an event in Foxbourogh on Tuesday night.
Posted by Fenway_Nation at 10:49 AM