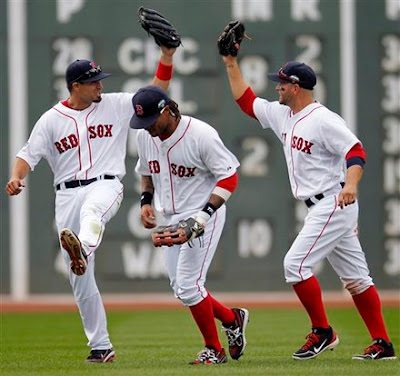 RED SOX- After a pair of big 8th innings on Friday and Saturday's wins, the Red Sox got off to a fairly quick start on Sunday at Fenway Park when Kevin Youkilis led off the top of the 2nd with a single followed by a double from DH David Ortiz to put two on with nobody out and OF Cody Ross in the Batter's Box. Long story short, Ross got all of Matt Moore's pitch and simply belted it over the Monster Seats to make it a 3-0 ballgame as the ball bounced around somewhere on the Mass Turnpike [not much of an exaggeration, by the way- NANESB!].

A day after his logging his first-ever stolen [and a trainwreck of a slide at that- NANESB!] C Kelly Shoppach belted an RBI double to make it a 4-0 game. However, the Rays would get to starter Felix Doubront in the top of the 5th to make it a 1-run game before a 6th inning Luke Scott solo homer tied the contest up at 4-4.

However, in the bottom half of the 6th, the Red Sox would re-take the lead on an RBI double by Big Papi. Sox SS Mike Aviles led off the bottom of the 7th with a solo homer to make it a 6-4 game.

Valentine would have to go to his bullpen early, but the pen managed to preserve the 6-4 lead thanks to a 1-2-3 top od the 9th from Alfrdo Aceves. Red Sox take the first three games of this weekend's 4-game series.

Tomorrow's Patiots Day game gets underway at 11:05 AM with Daniel Bard getting the start against James Shields. The game will be televised on NESN. 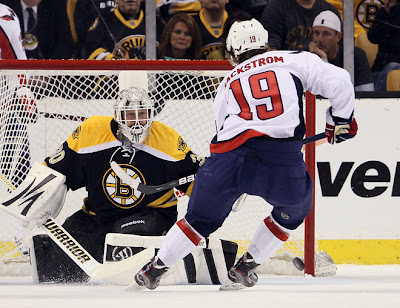 BOSTON BRUINS- The 1st round of the playoffs for the defending Stanley Cup champion Boston Bruins are heading to Washington DC's Verizon Center with the series tied at 1 game each thanks to a tie-breaking tally from Niklas Backstrom less than 3 minutes into a second overtime on Saturday afternoon.

The Caps got on the board first with a goal from RW Troy Brouwer late in the second before the Bruins were able to figure out a way past Washington's Braden Holtby midway through the 3rd, with Benoit Pouliot knotting up the contest at 1-1. The first OT passed without any scoring before Backstrom netted the game-winning goal easly in 2 OT.

Niether team scored on the power play on Saturday- Boston had 2, the Caps had 3. Tim Thomas turned aside 37 of 39 shots faced while Braden Holtby stopped all but one of the 44 shots he faced.

Game three will take place Monday night at 7:30 PM ET and will be televised on the NBC Sports network.

ELSEWHERE IN THE STANLEY CUP PLAYOFFS- A pair of teams with a strong regular-season showing now find themselves on the brink of elimination Sunday night.

The Phildelphia Flyers roughed up the Pittsburg Penguins, winning by an 8-4 final in a game that saw 72 total penalty minutes assesed. To add insult to injury, Penguins wingers Aaron Asham and Craig Adams face automatic suspensions from the league for cross-checking and instigating fights with Flyers Scott Hartnell and Braden Schenn.

Over on the West Coast- back-to-back President's Trophy winners Vancouver were shut out by the Los Angeles Kings at LA's Staples Center after the Kings won two games in Vancouver- including two shorthanded goals from Dustin Brown in Friday Night's Game 2.

Brown also accounted for the only goal in Game 3, beating Marblehead, MA native Cory Schnieder who was between the pipes for Roberto Luongo late in the 3rd on Sunday night.

NBA- The Celtics went 2-1 on a 3-game 3-night road trip to Toronto, New Jersey and Charlotte over the weekend.

After a 94-82 win against the Nets Saturday night, Kevin Garnett, Ray Allen and Paul Pierce were given Sunday night off and didn't even make the trip to Charlotte. Even without the C's Big 3, they were still able to handle the Bobcats fairly easily with Rajon Rondo having 20 points and 16 assists on the night. Curiously, the C's beat the Bobcats by the exact same score they beat the Nets on Sunday night- 94-82.

Guard Mickael Pietrus returned to the C's lineup on Friday night after suffering a concussion when he fell and hit his head on the floor in Philadelphia back in late March. Pietrus had 11 points and 6 rebounds in Sunday night's game against the Bobcats.
Posted by Fenway_Nation at 10:18 PM