Hop to It- Japanese Patrons Flock to Nagoya 'Bunny Cafe'

Seriously- when I heard that Japan had a bunny-themed restaurant, I figured it would be an eatery where the waitstaff would look like this: 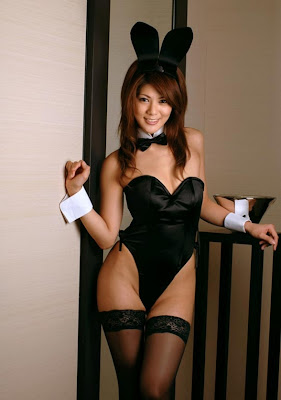 I mean- c'mon, it's Japan. They already have such a thing as 'Maid Cafes'- which are dining establishments staffed almost exclusively by young women in maid outfits. Seriously, go ahead and check Wikipedia, I'll wait.

Anywhoo, although the Year of the Rabbit has come and gone, I thought Easter might be as good a time as any to highlight an article I recently saw about an offbeat dining experience in Japan.

For at least one cafe in the central Honshu city of Nagoya they really mean actual bunnies. And they're not on the menu, either.

It seems as though most apartments in Japan prohibit renters from keeping pets. To offset that, Nagoya's Usagi-to-Cafe (or Rabbit & Cafe) offers patrons the chance to play with a number of pet rabbits kept on the premises. The cafe also serves coffee, dishes decorated to look like rabbits and rabbit pottery.


Usagi-to-Cafe is a variation of a cat-themed Tokyo restaurant called Cafe Calico where patrons can dine or play with cats kept on site. While not as clean and fastidious as cats (who can mingle in the dining area with the patrons) the rabbits are kept in an enclosure separate from the dining area [this is making me wonder if they had any ads with whoever did the Japanese voiceover from the movie version of Lennie from Of Mice and Men- NANESB!].

Cafe patrons are charged a ¥900 (about $11) cover charge and an additional ¥100 per minute to cuddle or play with one of the 18 rabbits on hand. Usagi-to-Cafe also has a BYOB policy- as in 'Bring Your Own Bunny'- where owners can bring their pet rabbits to socialize with the cafe's own rabbits.
Posted by Fenway_Nation at 1:27 AM