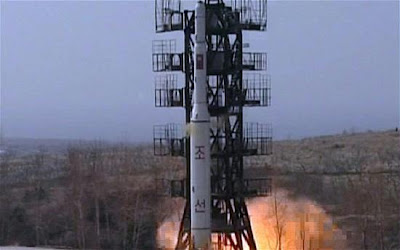 Just in case you were wondering, 'Juche' is a political thesis from the late North Korean dictator Kim Il Sung that supposedly emphasised military and economic self-reliance. This is somewhat ironic, considering that Sung and his successors have relied heavily on imported food and materials long before the 1991 collapse of the Soviet Union- one of North Korea's main trading partners.

As North Korea dedicated its efforts to building up their military arsenal in recent years, North Korean civilians have endured drought, famine and government crackdowns. This did not change after Kim Il Sung's 1994 death or the December 2011 passing of his son Kim Jong Il. Within weeks of Kim Il Jong's death, his youngest son and heir apparent- Kim Jong Un- took power.

In carrying on his father and grandfather's traditions of flouting treaties and international agreements, North Korea had been preparing all month to launch a long-range rocket. As US, South Korean and Japanese forces in the region went on heightened alert, the secretive North Korean government took the unusual step of allowing foreign reporters in to view the Sohae launch site, which is in the northwestern part of the country along the border with China. At the end of March, Japan's defense ministry announced they would shoot down North Korea's rocket should it pass over Japanese territory. In 2009, a long-range rocket from North Korea overflew Japan's home islands during a similar launch.

The US State Department says the launch is a breach of United Nations Security Council sanctions andan agreement reached between the USA and North Korea in February of this year restricting further development of North Korea's long-range weaponry. The North Korean regime, however, insists that Thursday's launch was to put a satellite into orbit to mark Kim Il Sung's 100th birthday. Japan, the South and the USA believe the lauch is to further develop long range missile technology.

However, in what was probably the least surprising development since the sun rising in the east, the Unha ("galaxy") rocket followed a similar trajectory to that of Keith Olbermann's broadcast career- crashing and burning spectacularly shortly after launch. The Nork rocket reportedly didn't even make it as far as 100km before exploding over the East China Sea.

In a rare move, the state-run news agency reported to a North Korean audience that the launch was unsuccessful. North Korean broadcasts are typically reserved for flowery, melodramatic propaganda heaping nonstop praise on the communist government. South Korean military experts believe that Un will try and deflect attention away from the failed launch or a military provocation directed against the South.
Posted by Fenway_Nation at 11:28 PM